Brian Cox has never been one to mince words, but does he really think that HBO is similar to this notorious group?

Brian Cox found an instantly iconic television role in HBO’s dark comedy-drama Succession, in which he plays the abrasive, foul-mouthed media mogul Logan Roy and lords over a brood of squabbling, neurotic family members and various flunkies. Logan Roy is not a character who is ever reluctant to dole out criticism in the harshest, most hyperbolic terms possible, which seems to be nearly as much Brian Cox as anything. For example, per The Hollywood Reporter, at the recent Edinburgh TV Festival, Brian Cox entertained an audience with anecdotes from his long and illustrious acting career and made an eyebrow-raising statement comparing HBO to the Gestapo, the notorious secret police of Nazi Germany.

It should be noted that Brian Cox’s claim that the Home Box Office network has a “Gestapo-element” was made very much in jest. Specifically, Brian Cox was noting that HBO information security is very tight and would not like him to have too loose of lips around future events or spoilers for the show. That actually seems far more reasonable than the Gestapo (who were noted for their ruthlessness and violence even by the standards of the Nazi regime) would be in similar circumstances, though that particular arm of the Third Reich did not handle entertainment or propaganda. Given that we live in what seems to be a very paranoid time as it comes to leaks (probably not helped by notoriously spoiler-prone celebrities like Mark Ruffalo and Tom Holland), it seems understandable that HBO would not want him dropping major storyline clues left and right.

In addition to Brian Cox, Succession stars Jeremy Strong, Kieran Culkin, and Sarah Snook as members of the Roy family. It also has a large extended cast, including actors like Fisher Stevens, Nicholas Braun, and Alan Ruck. The show was created by Jesse Armstrong, who Brian Cox described as an “absolute genius.” Critics largely seem to agree, with Succession being one of the most praised shows on television right now. It has been nominated for a large number of awards, including Golden Globes and Primetime Emmys, and won a large percentage. Brian Cox himself has received a Golden Globe Award for Best Actor for his part as Logan Roy. For his other acting work, Brian Cox has also received a Primetime Emmy Award.

Brian Cox is known for his outspoken, sometimes controversial opinions. He recently made headlines for speaking up against so-called “cancel culture,” decrying it as “a kind of modern-day McCarthyism” and “​​total fascism.” It seems that Brian Cox is pretty ready to go to the fascism-analogy well when he has strong feelings on a subject. He also caught quite a bit of flak in the public eye for referring to actor Johnny Depp as “so overblown, so overrated” in his recent memoir Putting the Rabbit in the Hat. He would later go on to say he regretted that, and he felt in retrospect that it was “harsh.” We shall just have to see whether Brian Cox will have any similar regrets about describing his employers in terms of the Gestapo. 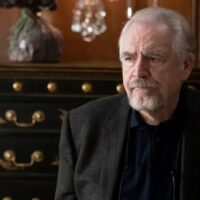