Brandon Routh had a turn as a superhero before and it didn’t exactly go as expected. It’s a shame considering it’s often the role of a lifetime, especially these days, to get into an iconic unitard and get to work fighting bad guys on the big (or small) screen. These aren’t one-and-done ventures anymore. But for Routh, it was with Superman. Well, his big-screen superhero days might not be behind him quite yet. Take a look at the actor as part of another group, this time as Reed Richards in the Fantastic Four.

While there is no official casting news around this Brandon Routh art in the Mr.Fantastic suit it hasn’t stopped fans from starting to push for the actor in the part. There have been plenty of rumors around what will happen with this next Fantastic Four movie without anything close to solid word about casting or even script. We know that it will take place, for the first time, in the Marvel Cinematic Universe meaning the next actor to take a role in the group will likely have staying power within a new franchise. It would be awesome to have Routh make a “comeback” in this way.

And it’s why this fan art isn’t the only we’ve seen of Brandon Routh in the last few days. There’s been an increasing call to get him into the suit as Reed Richards and line up with Sue Storm’s Invisible Woman, Johnny Storm’s Human Torch, and Ben Grimm’s The Thing. Again no real word is out there from Marvel Studios about their supposed plans for the franchise, but take a look at what some other fans had conjured up for Routh. He sure does look the part.

There are a lot of ways to go with Reed Richards in a new movie. While Brandon Routh for sure can fill out the uniform, we’ve seen different iterations in the past. Ioan Gruffudd played the character in 2005’s Fantastic Four and then reprised the role in the follow-up Rise of the Silver Surfer. Then Miles Teller took up the call in 2015’s rebooted version. Neither had staying power and the movies pretty much, well, sucked. There’s great hope this next story will right some of those wrongs and continue the group on a path to being relevant in the universe.

Meanwhile, Brandon Routh did take his first superhero turn back in 2006’s Superman Returns. The return to the big screen for the iconic character didn’t go completely to plan and no other films were made in that universe. Again, a total impossibility when you consider the current nature of the superhero universe. But the actor has also had another superhero turn of late, this time in the Arrowverse as The Atom. He actually did reprise his Superman role here in their Crisis on Infinite Earths story arc.

Will Brandon Routh get in on the Fantastic Four action? Probably not if we are just being honest. But it is cool to see him in the role and to dream about the possibility. 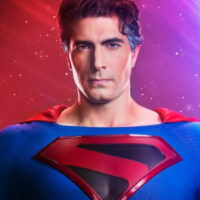 Brandon Routh To Return As Superman?