Brad Pitt is well known for movies like Ocean’s 11, movies he did with director Quentin Tarantino, the time he starred in an action flick with his ex-wife Angelina Jolie, and, of course, Fight Club. With so many hits out there, it’s hard to choose the ones that stand out the most. One of his movies that is definitely something different from the rest is World War Z. It’s a film where Brad Pitt plays a different kind of character for him. Audiences are now checking the movie out on Hulu, where it’s climbing the streaming service’s charts.

World War Z is a pandemic movie, it’s a zombie movie, it’s an action story. Brad Pitt plays Gerry Lane, a former agent of the United Nations. When the audience first meets him, he’s driving through traffic with his family. Mireille Enos plays his wife. They are speaking to their two children about fast-moving animals. Something seems to be happening outside of the car. As the intensity of “something is wrong” picks up, with civilians, running and screaming in the street, a police officer comes to the family’s window and tells them to stay in their vehicle. Then, a giant truck runs him over.

People are running through the streets screaming and it’s unclear what’s happening, but something is definitely wrong. Since their vehicle is stuck in traffic, Brad Pitt’s family leaves it behind and starts joining the crowds moving through the street. They continue on this path only briefly before Brad Pitt turns around and sees that something that looks like a person is jumping through the air at a super-fast pace and biting people. He finds an old RV abandoned in the road, but not blocked in, tosses his family inside, and away they go for a terrifying road trip through a newly zombie-infested United States. The family heads to New Jersey, where they briefly find refuge, but eventually, things go wrong with zombie attacks, and the family is evacuated via helicopter and brought to a US Navy ship.

On the ship, Brad Pitt learns that a scientist there says that the zombie outbreak is a virus. They want Pitt to now work on finding the outbreak source. As a father, he says no and that he won’t leave his family behind during a deadly zombie pandemic. The officials tell him that if he wants his family to stay safe on this ship and away from the monsters that eat people, he’s going to do what they say. Hands tied, Brad Pitt is now forced to attempt to save the world.

World War Z brings something different to the zombie genre. It isn’t easy to compare it to a lot of other Brad Pitt movies, either. As its own kind of story, it’s managed to refind a home on streaming all these years after its 2013 release in movie theaters. Fortunately, it’s a movie that did well at the box office, too. On a budget estimated to be somewhere between $190 million and $269 million, World War Z was not cheap. It brought in $540 million though. On its budget, that didn’t guarantee it a sequel, but it did well enough that it was still a possibility. For a while, that possibility was strongly talked about. However, it’s been so long now that it seems unlikely to ever happen.

Critics and audiences like the Brad Pitt zombie movie well enough. Clearly, many are interested enough now to be catching it on streaming. On Rotten Tomatoes, critics have given the movie a score of 66%, while audiences like it only slightly better with a score of 72%. Those numbers are respectable, but nowhere near Brad Pitt’s most loved work.

These days, the star is definitely still busy making movies. He is soon to be seen in The Lost City with Sandra Bullock and Channing Tatum. The comedy has him in a small but already memorable role. He will be found as a character straight out of the jungle, with long hair, a big gun, and Rambo-like vibes. Audiences are also waiting to catch him in Bullet Train, an action movie recently delayed until the summer of 2022. For now, fans can see Brad Pitt in World War Z, streaming on Hulu. 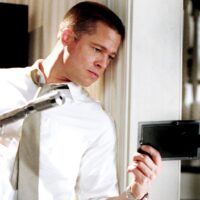 A Brad Pitt Blockbuster Is Climbing The Streaming Charts