Blade is getting a reboot in the Marvel Cinematic Universe and it’s already attracted a ton of grade-A talent to the project. We aren’t getting the Wesley Snipes version anymore, but possibly a younger, hipper and sleeker look at the character who really rose to movie fame back in the 90s. And in all of the excitement of the character hitting screens again, the film looks like it just got its working title. The new version will be called Blade, the Vampire Slayer.

If this new Blade title is giving you Buffy vibes, you aren’t the only one. In fact, it’s so close to Buffy, The Vampire Slayer that it almost feels like a mistake. Considering all of the ways one could go with the title, why name it nearly one-for-one from an all-time character in the world of vampires? It’s just so confusing and, in some ways, undermines the cool tone and direction this movie might have been going. Not to say the title of a movie tells the whole story, but having it so closely resemble a somewhat campy WB television show from the late 1990s just feels so odd.

Whether this new title sticks after it receives, almost assuredly, negative backlash because of the striking resemblance to an iconic character remains to be seen. I wouldn’t be shocked if, by the time it hits theaters, it’s pivoted to something new. Maybe something like, Blade, The Vampire Diaries or Blade, Vampire Academy, or maybe even Blade, Twilight. Any of these would be equally ridiculous and yet, here we are.

The Blade reboot, working title aside, is gearing up to be quite the film. They recast Wesley Snipes’s titular character with Mahershala Ali who is among the best working actors in Hollywood. He’s already won two Academy Awards for his supporting roles in Greenbrook and Moonlight and probably should have won the Emmy Award for his turn on HBO’s True Detective. He should play perfectly as the daywalker who takes down vampires as part of the core mission.

Plus, along with the release of the Blade title came the news that Stacy Osei-Kuffour was coming on board to write the script. Her previous work includes staff writing for HBO’s Watchmen and Run as well as Amazon’s Hunters. These three were among the best shows over the last year or so. Having this young and upcoming voice at the center of the script could make it really stand out from other films in the Marvel Cinematic Universe.

And we already know that Oscar Isaac is going to make an appearance in the next Blade film in his new role of Moon Knight. It’s going to be a packed cast and likely offers a totally new way to think about the character.

Let’s just hope they can ditch the Buffy vibes before things really get underway. Because the title is just a little too silly and aligned with the teeny-bopper show to take it all that seriously. As of right now, Blade is set for a 2022 release. That gives them enough time to think this thing through. 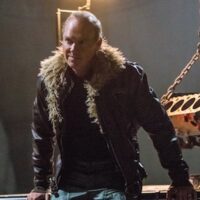 Michael Keaton To Return As Vulture In A New Marvel Movie