Ever since he officially joined the DC Extended Universe, Dwayne Johnson has been teasing that Black Adam would meet Superman on-screen. Now, he has finally delivered. Sort of. If you went to see DC League of Super-Pets in theaters this past weekend, you were hopefully wise enough to wait and watch for an end-credits scene. If so, you saw the matchup every DC fan (and more than a few Marvel fans) have been hoping to see: Black Adam (voiced by Johnson) and Superman facing off. Now, it wasn’t the Dwayne Johnson/Henry Cavill matchup we had all been hoping for, but it’s something, and Johnson himself confirmed he was indeed behind the whole thing.

In a new Instagram post, Dwayne Johnson thanked fans and discussed the animated cameo. “THANK YOU for making SUPER PETS the #1 MOVIE,” he said. “But did you stay til the VERY END credits?” He added a couple of stills from the scene with his post, which revealed that Black Adam has a dog named Anubis (which he also voiced), who loves his Batman squeezy toy. “You guys already know how I feel about SUPERMAN vs BLACK ADAM…With the DC SUPER PETS UNIVERSE we had an opportunity to build out this awesome animated universe in a big, fun, cool way.” Johnson said he came up with the idea for the cameo after drinking his brand of tequila, Teremana, but we’re not sure if this is true or just a clever plug by Johnson. Warner Bros. has not officially released the end-credits scene, but one industrious moviegoer posted it to Twitter, so watch it now, before Warner Bros. has it taken down. It’s actually a fun little scene, with a hilarious argument between Krypto and Anubis.

It may not be the rumored Henry Cavill/Superman cameo we had hoped for, as John Krasinski voiced Superman, but fans shouldn’t give up hope just yet that Cavill may indeed don the cape as Superman once more. There have been all sorts of rumors about how Warner Bros. could incorporate Cavill back into the DC fold, despite DC Creative Officer Jim Lee revealing at Comic-Con that there are no plans to extend the Synderverse storylines. Considering the response from fans to Ben Affleck seemingly returning for an Aquaman 2 cameo, Warner Bros. would miss a huge opportunity to bring back a fan-favorite actor to the iconic role in Black Adam. A Tweet from Johnson in early July still gives hope that a live-action Superman/Black Adam meeting is in the works, and is just a closely-guarded secret until Johnson’s film hits theaters. “I hear you & I always got you,” he told a fan hoping for a Superman vs. Black Adam cameo.

Having Dwayne Johnson voice Black Adam (as well as Anubis and Krypto) for the DC Super-Pets cameo was a fun treat, but it only puts the pressure on Warner Bros. to meet fan demand for Cavill to return. Black Adam hits theaters on October 21, so until then, we can get our DC superhero fix with Super-Pets, starring Kevin Hart as Ace the Bat-Dog, Diego Luna as Chip, Kate McKinnon as Lulu, Natasha Lyonne as Merton, Vanessa Bayer as PB, and Keanu Reeves as Batman. Zachary Levi follows up those films reprising the lead in Shazam: Fury of the Gods on December 21. That allows for the possibility of yet another Superman cameo, although the last film let us down on a possible Cavill appearance, as fans remember. 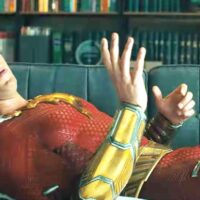