The Power of the Dog is the latest Benedict Cumberbatch movie, and while some critics responded to the film in a positive way, it seems that Cumberbatch’s biggest critic is Sam Elliot. The Power of the Dog has received multiple nominations, including Academy Awards and Golden Globes since its initial main release on Netflix. Elliot recently gave his personal opinion about the film during a podcast interview and let’s just say it wasn’t exactly good news. Cumberbatch, alongside his own fans, has finally come out to stand up to Elliot’s criticism of the movie.

Over Marc Maron’s podcast where Sam Elliot was a guest, The Power of the Dog was brought up. Sam Elliot has starred in a number of Westerns throughout his career, so it seems reasonable for the topic of the film to be brought up. However, Elliot didn’t like any aspects of the film. The 77-year-old actor made a few comments, including some statements calling the film a, “piece of sh**.” Many alleged that Sam Elliott’s comments were slamming the movie’s gay themes. In an interview with the BAFTA Film sessions on March 4th, Benedict Cumberbatch finally had a chance to respond and defend the movie. According to the Digital Spy, Cumberbatch said in regards to Elliot’s criticism, “I’m trying very hard not to say anything about a very odd reaction that happened the other day on a radio podcast over here,” Benedict Cumberbatch began.

Without meaning to stir over the ashes of that […] someone really took offence to – I haven’t heard it so it’s unfair for me to comment in detail on it – to the West being portrayed in this way. These people still exist in our world. Whether it’s on our doorstep or whether it’s down the road or whether it’s someone we meet in a bar or pub or on the sports field, there is aggression and anger and frustration and an inability to control or know who you are in that moment that causes damage to that person and, as we know, damage to those around them. There’s no harm in looking at a character to get to the root causes of that. This is a very specific case of repression, but also due to an intolerance for that true identity that Phil is that he can’t fully be. The more we look under the hood of toxic masculinity and try to discover the root causes of it, the bigger chances we have of dealing with it when it arises with our children.

Overall, it appears that Benedict Cumberbatch thought that Elliot’s response was a bit shocking and a little “odd.” Cumberbatch felt that The Power of the Dog was indeed very powerful and told a story that needed to be shared with a larger audience. The film is a Western drama, with a lot of serious aspects portrayed. Cumberbatch believed that it wasn’t wrong for certain issues to be discussed or represented in a Western film.

Benedict Cumberbatch hinted that he hasn’t heard all of what Sam Elliott had to say, but the original podcast interview went viral shortly after it was released. The clip about The Power Of the Dog gained a lot of attention. You can listen to Sam Elliott discussing his thoughts on the movie in the clip below. Warning: The below audio contains sensitive content.

The Power of the Dog is based on a novel of the same name which was published in 1967 and written by Thomas Savage. Some of the major themes that are showcased and portrayed in the film are love, grief, and sexuality. Benedict Cumberbatch played the role of Phil Burbank, a rancher in Montana. The movie follows Cumberbatch’s character as he deals with his brother’s wife and son, and his own understanding of how he is. According to The Huffington Post, Cumberbatch discussed his character, stating, “This is a very specific case of repression, but also due to an intolerance for that true identity that Phil is that he can’t fully be.” 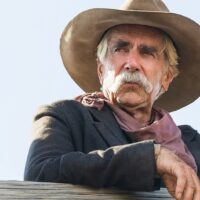