Arnold Schwarzenegger had two goals when he made the trip from his native Austria to America. The first was to elevate the sport of bodybuilding, and the other was to use that to get into movies. He not only succeeded at both but changed the landscape of both as well. As a bodybuilder, he won Mr. Olympia seven times, a record that would stand for thirty years. He maintained a figure in the fitness world where he advocates for children to stay active and be healthy. Once moving into the acting world, he changed the landscape of film by being one of the first antagonists as the draw of a movie. His accent provided a unique aspect to his characters and made some of them even more memorable. But he wasn’t as enamored with it as we were, confessing he worked to lose it for over a decade.

The actor appeared on the Howard Stern show, discussing his journey to breaking into acting. While he admitted that his first acting job happened virtually immediately following getting “off the boat,” it wasn’t without struggle. His lead role in Hercules in New York was infamously dubbed with an American voice. The film was panned for many reasons, but the experience spurred Arnold Schwarzenegger to get acting and speech classes. In his interview, he said he always planned on getting rid of the accent and that maybe his coach “should give me my money back,” since the accent remained his most unique attribute. After over a decade of work following his debut, he would experience a stretch of years that would change his life.

In the five-year period from 1982 to 1987, he would launch three franchises that are still going today and another action film that would give us one of the most quotable phrases in history. Arnold Schwarzenegger landed lead roles in Conan the Barbarian, The Terminator, and Predator, all successful franchises. He also headlined the film Commando, giving us the forever memorable “Get to the choppah!” No matter how hard he tried to lose the accent, it endured through all insecurities and became one of the most often used impressions in the last four decades.

Towards the end of the interview, Arnold Schwarzenegger talks about his outlook on success. Howard Stern points out that it wasn’t that he was gifted physically but that it was the work. The actor agreed and added that the belief in yourself is essential. He says that you will hear the naysayers from the moment you set a big goal. “This is stupid. You will never make it,” he said they would tell you. But he reminds us that you are capable of breaking new ground and doing things no one has ever done before. 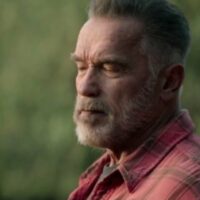