At a time when WarnerMedia is moving forward with the Aquaman films, DC Comics doesn’t have any new Aquaman installments listed in their March 2021 titles. It seems DC has canceled the comic indefinitely. The comic book industry is currently struggling and cuts have been made in many series. Still, the cancellation of one that so recently took off in films was something of a surprise to fans.

The New 52 reboot for DC brought Arthur Curry back into the comics world nearly a decade ago. Geoff Johns has been writing for Justice League at the time and was tapped to write the start of the new series. His run gained a lot of attention. A lot of the material that made its way into Jason Momoa’s film originated in Geoff Johns’ stories. Joe Prado and Ivan Reis also worked on the ongoing stories that would later become an inspiration for the movies.

Recently, the series has been written by Kelly Sue DeConnick. After her departure from the Aquaman comics was announced, she addressed fans on Twitter. “Maybe this is a good place to say I have come to love Arthur and Mera and their family in Amnesty Bay over the last year (or two? What is time?). They’ve inspired me, surprised me, made me laugh and taught me some things. I will be forever grateful for this and for the kindness and support of the #Aquafans. There’s a lot of anxiety when a new team comes aboard and I deeply appreciate your trust, patience and support. The only bad news for me personally is that there’s no one to pass the torch to in the immediate!”

After DeConnick’s Aquaman run, we saw the Endless Winter crossover event and the Future State stories for the characters. For now, the only place to see Aquaman characters is in the Justice League series being handled by Brian Bendis and David Marquez.

There have been a lot of big events in the recent Aquaman comics. If you haven’t been keeping up, you have missed a lot. For one thing, Mera and Arthur Curry were married. That was an event Kelly Sue DeConnick had imagined for a long time. For another thing, the giant seahorse was actually totally awesome in issue #66 (as part of the run for Endless Winter). The concept art for this in the movies was something that got mocked a fair amount, but artist Miguel Mendonca has consistently done a standout job making ideas that could be goofy into something great. For a long time, the Aquaman franchise was dominated by the cartoons and goofy memes. The work of the writers and artists over the past decade have shown what the Aquaman stories could be. Without them, it’s hard to imagine Jason Momoa’s movie would have ever happened.

While you’ll be able to catch Aquaman in the Justice League comics, for the foreseeable future it will be just the movies for the King of Atlantis. At the same time DC Comics has canceled their run, WarnerMedia is planning a December 2022 release for Aquaman 2. Assuming the Amber Heard controversies don’t slow them down. 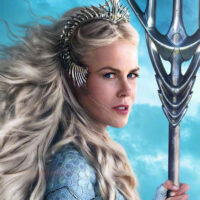