Actor Anthony Montgomery has been a part of two major TV series. His biggest career moment so far was as Ensign Travis Mayweather on the series Star Trek: Enterprise. But Montgomery has also starred in another big-time series and played a key role for a number of years. He was Dr. Andre Maddox in the long-running (and still going) daytime soap opera General Hospital.

Long before either of those well-known gigs, Anthony Montgomery was a stand-up comedian. After graduating from college (Ball State University) he took to the stage for a brief time. It was something he truly enjoyed, and it carried over into his acting career.

Montgomery was performing in a serious stage play in 2003, Dutchman, a story about race relations, when he explained why he was also performing his stand-up act, From Midwest To Wild West. “Because the piece is as heavy as it is, and my love of doing stand-up comedy, I figured let’s go ahead and offset the weight of that and just have fun doing a standup comedy show,” he told fans in a chat with StarTrek.com.

He also mentioned his shows contain very little profanity for one specific reason. “I just go up and I have fun, that’s all. I don’t have a lot of profanity in the show, very little in fact, because my mother has been to every show I did in Indiana. I wanted my family to be proud of me, including my Grandmother.”

Anthony Montgomery’s career started on the small screen and for the bulk of his career, that is where it has remained. Out of the gate he was seen on Beyond Belief: Fact or Fiction before moving on to JAG. He also played the lead role of Postmaster P. in the cult horror film Leprechaun in the Hood.

Montgomery’s first taste of science fiction came in an uncredited role on the series Stargate SG-1. He found roles on series such as Stark Raving Mad, Frasier, Movie Stars, and Charmed before he grabbed his first recurring role on the series Popular. The WB series told the story of two girls who literally despise each other but are forced together as their parents are getting married to each other. Montgomery was a part of 11 episodes. This gave him a taste of what was to come next.

ANTHONY MONTGOMERY FIGHTS TO BE ON STAR TREK

Anthony Montgomery had his sights set on Star Trek for years. So much so that he auditioned not once, not twice, but three times to join the franchise. His first audition was for a regular role on the Star Trek: Voyager series. Strike one. He was then asked to come back to Voyager to audition for an episode (Repression) as the son of Tuvok. Strike two. But to Montgomery’s credit, he made an impression, because he was brought in to audition for Star Trek: Enterprise in a lead role. Third time’s the charm and he got the part as Ensign Travis Mayweather.

Montgomery played Mayweather for the series’ entire four-season, 97-episode run. It seems, though, that Anthony Montgomery has mixed feelings about his character, not knowing the direction producers were taking with him. “Travis, he was there and I did my best with what I was given to the show and the evolution of the character, and hopefully, the fans got to see it. But there was not the kind of growth that I was hoping for over time. Travis didn’t have very much to do over those four years, the 98 episodes. They had a lot of people to write for and you have to pick and choose what stories you’re going to tell,” he said to Trek Movie.

From his continuing comments, it sounds like the writers weren’t too sure where they were taking Mayweather. “I was never pitched on what the arc was going to be for him other than he was a space boomer and he had more space exploration and space experience than even the captain did. One of the things I do remember them saying was that Travis and Tripp were supposed to be good friends. And then as the show went on, I think that relationship that was going to be with Travis and Trip ended up being with Malcolm and Trip, but I don’t know.”

It wasn’t only the non-direction Montgomery was getting with his character that made him uneasy, it was the constant threat of cancellation for the show. “We were more than ready to go to seasons five, six, and seven and beyond if that’s where they wanted us to go. I was cautiously optimistic. If they were going to do it, it would have been wonderful. But because I had also been in Hollywood for quite some time by then, I know that usually when the powers that be make a decision to terminate something, it’s usually gone.”

When the ax finally fell on the series, the decision didn’t sit well with Anthony Montgomery. “There was no reason for us to be taken off the air, in my opinion, in the first place. We weren’t in a good time slot, but I think we still had the best numbers for the network for what our show was. And we still could have been around. I was told that each of the different Star Trek incarnations took two, three to four years for the crew and everyone to gel together. Even the storied TNG crew.”

Given how Star Trek: Enterprise ended and the experiences he had during the four seasons, would he ever take up the mantle as Travis Montgomery again? Anthony Montgomery says, “Sure, of course, I would! I’m an actor, man. That’s what I do!”

AS MADDOX ON GENERAL HOSPITAL

Star Trek: Enterprise wasn’t the only big-time role in Anthony Montgomery’s career. He joined the super soap opera General Hospital in 2011 as a minor character named Aaron, then returned to the soap in 2015 with a much beefier role as Dr. Andre Maddox who, at first, was the epitome of doctorhood. He could do no wrong and always had the best intentions.

As with all soap operas, things aren’t what they seem to be and the same was for his character. Maddox had a shady past and it eventually caught up with him. Thankfully for Montgomery, his Dr. Maddox didn’t lose his life on the show (not that would truly make a difference) so even though his character said his goodbyes in 2019, the door is still wide open for a return.

Anthony Montgomery has continued to work outside of Star Trek and General Hospital. He found time on TV series such as NCIS, House, The Client List, and pulled in 8-episodes on Single Ladies. At one point he even played Lenny Kravitz. Lately, he was seen on Greenleaf, Magnum P.I., and The Family Business.

His talents aren’t focused completely on acting. He is also a writer. Anthony Montgomery, along with writer Brandon Easton, created the graphic novel Miles Away, a story about a 16-year-old boy who develops a superhuman ability and then is recruited by a shadowy organization to help them battle bad guys.

Anthony Montgomery is a singer too. His grandfather is legendary jazz musician Wes Montgomery and Anthony has followed in his footsteps, to a degree. Anthony doesn’t play guitar as well as his grandfather, but he has produced his own CD, titled What You Know About… He also has a hip-hop CD that he released in 2008 called A.T. with one song, Stimulation, that was featured on the series Single Ladies. 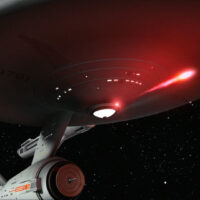