Anthony Hopkins is about to play one of the most well-known, influential, and controversial doctors of all time. And no, as much as we’d love to see it, we’re not talking about the infamous Dr. Hannibal Lecter. This doctor had a somewhat better reputation and ate almost no people whatsoever, as far as we know. Instead, Hopkins will play the Austrian founder of psychoanalysis, Sigmund Freud, in a film that will blend biography and history with fantasy.

According to The Hollywood Reporter, Freud’s Last Session is being shopped in Cannes as we speak. Anthony Hopkins will star as the eponymous doctor toward the end of his life in a debate with C.S. Lewis, best known as the author of The Chronicles of Narnia. It is based on a 2009 play of the same name, which sees the two cultural icons debate — as the play’s subtitle reads — “God, Love, Sex and the Meaning of Life.” In particular, THR says the film will probe into Freud’s relationship with his daughter Anna as well as Lewis’ “unconventional romance” with his friend’s mother. The film is set close to the outbreak of World War II, which helps explain why the title calls it Freud’s “last” session. The neurologist died only a few weeks after Germany began its invasion of Poland.

While Anthony Hopkins has been cast in the titular role, there’s no word yet on the rest of the cast, including who will play C.S. Lewis. Mark St. Germain (The God Committee), who wrote the play being adapted, will write the screenplay and it will be directed by Matt Brown (The Man Who Knew Infinity). Speaking to THR, Brown called Freud’s Last Session “incredibly timely and important.” He went on to elaborate, saying that “We live in an age that is so ideologically polarized, where everyone is stuck in their own tribes, with no real dialogue. I want to make a film for all audiences that is emotional, thought-provoking and creative. A film that asks the big questions, while investigating what is at the heart of the human condition: love, faith and mortality.”

There is no word yet on when Anthony Hopkins and the rest of the cast will appear on the big screen in Freud’s Last Session, though that isn’t surprising. The film is scheduled to begin production toward the end of this year in London. At the earliest, we can expect it to premiere some time in 2023.

That WestEnd Films and CAA Media Finance are shopping around the Anthony Hopkins film at Cannes is no mistake. The Oscar winner’s most recent film premiered last week at the film festival, and according to Variety it received a seven minute standing ovation that brought some of the cast and crew to tears. Hopkins stars in James Gray’s Armageddon Time — a period drama in which the The Silence of the Lambs star was joined by Anne Hathaway (Les Misérables), Jeremy Strong (Succession), and Jessica Chastain (Zero Dark Thirty). While the Cannes premiere was last Thursday, there’s no word yet on its wide theatrical release date. 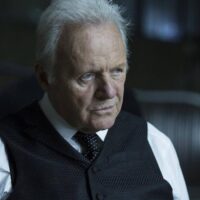