Angelina Jolie is about to take a comic book turn, entering the Marvel Cinematic Universe in what could be spectacular fashion when Eternals finally hits the big screen in December. While this will be her first superhero role (I’m not counting Lara Croft), it appears this wasn’t the first time she was offered such a role. In fact, in a talk with Empire, (via ComicBook.com and @CreamorScream) Angelina Jolie said she turned down a big part in another franchise.

In the interview, Angelina Jolie didn’t reveal which character, exactly, she said no to in the superhero realm. She did say it was a “famous” role but admitted that at the time the comic book game wasn’t where she wanted to use her acting talents. Obviously, with the number of characters out there in different franchises, it’s tough to pin down exactly which part Angelina Jolie is referring to here. There are quite a few possibilities. But it’s interesting to see why she landed on Thena in Eternals. In the interview, she said she “felt like something else was happening in this (Eternals) film.”

The willingness for Angelina Jolie to join Eternals as opposed to some other superhero franchise was the relative obscurity of the group within the comic book ranks and the zeitgeist as a whole. Hardcore Marvelers will know some of the backstories of the Eternals, but for the most part, this is a totally new set of characters for the average fan. It looks like that, in part, was what attracted Jolie to the Thena role. She said, “…it was very character-driven…These guys aren’t Spider-Man or Captain America or the Hulk. A lot of hardcore fans won’t know who the Eternals are. Introducing them all at once, that isn’t easy.”

Signs are pointing to a smaller role for Angelina Jolie in this first movie with the central story looking like it will focus more on Richard Madden’s Ikaris and Gemma Chan’s Sersi to start. As Jolie says, there are a lot of new faces to get to know here, and the Eternals group has a long-standing history on Earth (and in the Cosmos) that needs to be given a proper background. There is a lot of ground to cover and it looks like this first film merely sets the stage for a much larger conflict that will wrap itself into the Marvel Cinematic Universe’s story. From the first set of trailers, director Chloe Zhao’s movie could be one of the most gorgeous yet, a truly beautiful first look at a group of characters who come in all shapes and sizes and are imbued with an array of powers.

Even if Angelina Jolie doesn’t take top billing in Eternals, it looks like we will have more of her character moving forward in other projects. Giant Freakin Robot had the exclusive that Jolie signed a massive contract with Marvel that would put her in multiple different projects and also give her character a solo movie at some point. It would be crazy to bring on someone with the star power and talent of Angelina Jolie and simply have the character be a minor one-and-done. Marvel, and most studios frankly, simply doesn’t roll like that.

In the end, I bet we are thankful that Angelina Jolie turned that unknown superhero role in favor of Thena here. From a production, scope, and artistic standpoint, this one could end up being a much better fit for the actress. 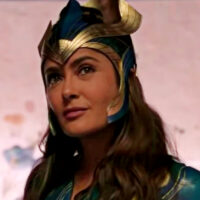