Unless the rock you’ve been living under is too heavy to let you peek out every once in a while, you know that Ana de Armas will soon be appearing as the late cinema icon Marilyn Monroe in the upcoming Netflix original Blonde. But while we’ve known De Armas was starring in the film for a while, actual images from the production have been scarce. On Wednesday we finally got a fresh batch of photos, and it’s honestly tough to tell where Monroe ends and De Armas begins.

The photos come courtesy of Vanity Fair (via Deadline). The first is of Adrien Brody as Monroe’s husband — and award winning writer of Death of a Salesman and The Crucible — Arthur Miller. After that comes a shot of Andrew Dominik directing De Armas and Bobby Cannavale, the latter of whom plays Joe DiMaggio. You can see those photos below, along with other previously released stills from the production.

Much of Blonde will focus on the differences between Marilyn Monroe’s personal and private personas, and in June Netflix released a teaser trailer for the film that drove that point home. Most of the teaser is comprised of Ana de Armas begging someone we can’t see to “please come,” as she sits in front of a makeup mirror as Toby Huss (Copshop) — who plays Monroe’s personal makeup artist Allan “Whitey” Snyder — touches up her face and assures her the person will appear. The moment is cut between shots of Monroe in more public spaces. By the end of the trailer it’s clear the person Monroe has been begging to come is her own, more public self. You can watch the teaser below.

While Blonde had been called a biopic, that label doesn’t really fit. The film is based on the 2000 novel of the same name by Joyce Carol Oates, who never meant for the story to be confused with biography. The story is Oates’ own imagining — mixed with researched fact — about Monroe’s death being part of a clandestine plot orchestrated by the Kennedys.

Blonde is set to stream on Netflix starting September 23, but if you don’t feel like like waiting that long, Ana de Armas is currently with her fellow Knives Out co-star Chris Evans in the action thriller The Gray Man, which has done well enough on the streamer that a sequel has already gotten the green light. Then next year De Armas and Evans will once again appear on screen together, this time for the romantic action comedy Ghosted. After that comes the John Wick spin-off Ballerina, in which De Armas will play an assassin out to avenge the deaths of her family. 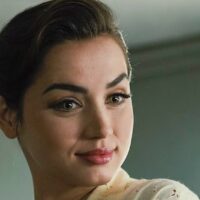