The last month and a half have brought up an incredible amount of emotion from those tuning into the defamation trial happening between ex-couple Johnny Depp and Amber Heard. While many have pushed back against Heard’s involvement in the anticipated Aquaman and the Lost Kingdom aka Aquaman 2, with some even jumping on board to sign an ever-growing petition to remove the actress from the feature, it seems as though their signatures were for naught. But those Depp supporters weren’t alone in their attempt to block Heard from appearing in the upcoming DCEU film.

As it would turn out, Amber Heard’s testimony regarding the fact that Warner Bros. wanted her ousted from the superhero flick was, in fact, true. During her time on the stand, the actress revealed that even before production began, the studio wanted her to be dropped from her role as Mera. She cited her lack of on-screen chemistry with the film’s star, Jason Momoa, as the primary reason, with the added ever-crushing attention from the press as the secondary. When they didn’t completely remove her, Heard stated that Warner Bros. attempted to cut down the actress’ role in the film and they’ve allegedly made comments that they plan to completely cut her out once her contract with them has run its course.

And now, all of Heard’s claims surrounding her involvement in the film have been backed up by an industry insider named Kathryn Arnold. During her testimony, Arnold revealed that Amber Heard’s saving grace was her co-star Jason Momoa and the film’s director James Wan. The two, alongside her management team, fought tooth and nail to keep Heard involved in the film as the titular character’s love interest. Arnold also revealed that Heard won’t appear in the feature’s official poster and was told to not attend the DC FanDome event later this year.

While it may come as a surprise as to why Jason Momoa and James Wan went to bat for Heard, it could be for several reasons. They, of course, may have been heading into the film’s production attempting to stay open-minded about the allegations from both Amber Heard and Johnny Depp, not judging either until they took in the full story. There’s also the possibility that it was a personally involved call – not wanting there to be another Mera to continue in the franchise and in doing so, keeping things uniform. And then, there are the huge setbacks the film has already faced. The pandemic messed up a lot of productions, and the Aquaman sequel took several hits during both its early and later days. Wan wanted to give his all to the piece, so he succumbed to the slowdowns and pushed the film back from December 2022 to March 2023. Taking Heard out and replacing her or just moving the story along would absolutely push the film back even further, something we’re sure Wan and Momoa were not keen to do.

Whatever the reason, Amber Heard has some great names backing her up. Along with Heard and Momoa, the upcoming film will star Patrick Wilson, Willem Dafoe, Dolph Lundgren, Yahya Abdul-Mateen II, Temuera Morrison, Nicole Kidman, and Randall Park. While none of Heard’s other colleagues have stepped forward to take a stance one way or the other, we’re sure Heard is happy that she’ll live to swim another day in Aquaman and the Lost Kingdom. 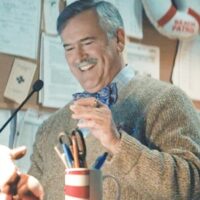 Bruce Campbell Has A Hilarious Response To Aquaman 2 Petition