One of the most heartbreaking and controversial moments in the Buffy the Vampire Slayer series happens toward the end of season six, when Amber Benson’s character Tara is shot and killed by a stray bullet fired by the villain Warren Mears (Adam Busch). Originally introduced as a love interest for Willow (Alyson Hannigan) in season 4, Tara became — in many fans’ eyes — as much a part of the heroic “Scooby Gang” as any of the series regulars. Not only did fans suffer the same kind of loss they would for any beloved character, but Tara’s death has since become an oft-cited example of the “bury your gays” trope in which LGBTQ characters are treated as more expendable than others. Now, it turns out Amber Benson is saying she was given the chance to return to Buffy, but she passed on those offers. In light of more recent news, it’s tough to blame her.

Amber Benson opened up for the first time about why she chose to not return to the Scoobs during an interview for the new book Into Every Generation a Slayer Is Born: How Buffy Staked Our Hearts by Evan Ross Katz (via Comic Book). She said that along with the offer to bring her back for a brief appearance in the season 7 episode “Conversations with Dead People” — in which she wouldn’t have played herself, but a disguised version of the season’s villain, the First Evil — there were ideas on the table to actually bring her character back from the dead. According to Benson, there were a few reasons why she said no.

Benson implies that she was promised her character wouldn’t be killed again off if she were to return, and that she wasn’t sure that was the case. “I didn’t really trust what was going to happen to the character,” Benson told Katz. “I think that’s something if you’ve talked to some other cast, people are like ‘Yeah, I came back… and then [Joss Whedon] just did what he wanted. Even though he told me that he wasn’t going to kill me in this way, he killed me in that way.’ I just didn’t feel super trusting of the situation.” As Comic Book points out, there’s a good chance that Amber Benson was referring to Charisma Carpenter who — along with other allegations she’s made against Whedon — has said she was promised her character wouldn’t be killed off if she returned to the Buffy spin-off series Angel, only to get killed off the episode she returned.

Amber Benson also says there was a conflict going on between her and someone else on Buffy — though she doesn’t name them — and says she treasured the closure she found with that situation when she left. “I had had some issues with somebody on the show, and it had kind of come to a head as I was getting ready to leave,” Benson recalled. “Leaving the show was sad because there are some of the crew and the writers and some of the cast that I just adore, but I had made my peace with that person and the show and I was done: ‘I’m leaving everything in a good place. I don’t need to come back.'”

And then beside any more emotional or sensational reasons, Amber Benson says scheduling was another major factor. “[Whedon] really wanted me to come back and we just couldn’t come to an agreement on it,” Benson said. “And most of that was my schedule. I was gonna miss going to England, not being able to direct The Ghosts of Albion if I had said yes.” Ghosts of Albion: Legacy is a miniseries Benson directed based on a fantasy series she co-created with Christopher Golden.

Amber Benson also reflected on the fan backlash after the death of her character. That backlash, she said, and Whedon’s introspection afterward had a lot to do with why the Buffy creator wanted her back. “I think it hit Joss that he had made a mistake, that he had been short-sighted,” Benson said. “I truly, for all of his faults and for all of the things about him that are frustrating, I don’t think he ever meant to hurt the LGBTQ+ community. He just wasn’t thinking. I can truly, from the bottom of my heart, say [that] this was nothing intentional. This was a thoughtless error.”

Into Every Generation a Slayer Is Born: How Buffy Staked Our Hearts by Evan Ross Katz is on sale now, and Amber Benson’s words aren’t the first from the book that have stirred controversy among Buffy fans. Last week, reports emerged of Nicholas Brendon‘s interview in the book, in which the former Buffy star took some merciless potshots at his former co-star David Boreanaz. After calling Boreanaz’s character Angel “the most boring character in TV history,” among other things, Brendon added, “I’m not sure if I’m talking about David or Angel at this point now.” 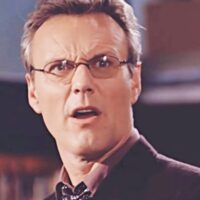