Alien Originally Had A Sex Scene

Sigourney Weaver is one of the biggest actresses in the world, and her portrayal of Ripley in the Alien franchise turned her into an icon. The sci-fi horror-based movie was released in 1979 and helped put director Ridley Scott and Weaver on the map. However, the script for the movie was vastly different when Weaver joined and even had a sex scene, which was heavily criticized by Weaver.

According to Sigourney Weaver, “We had a great talk about the [Alien] script that I was pretty critical of. I said, ‘Eh, it’s pretty bleak, I don’t know about this love scene, would you really get it on while this thing is running around?’ Anyway, we had a good talk.”

To be honest, she has a fantastic point, as who would be worrying about lovemaking in a time when survival should be the highest concern? We are looking at you, The Walking Dead. Anyway, Sigourney Weaver revealed the sex scene story on the WTF with Marc Maron podcast, as she spoke openly about the first Alien movie and revealed a lot of details that many people may have not known about making the first movie in the franchise.

For instance, Sigourney Weaver stated she met Ridley Scott in what she calls, “hooker boots.” She also stated that big-name actors were trying to land the lead in the Alien movie, which ultimately went to her. She also revealed that she felt that Fox wanted nothing to do with her, especially considering that having a woman be the one who survives at the end was seen as taboo.

Thankfully, Fox wised up and allowed Ridley Scott to make Alien the way that he saw fit, which would spawn a highly successful franchise. In fact, that franchise is going through a bit of a revival, as Scott is currently working on a new Alien series for Hulu. This new series has nothing to do with the Noah Hawley series that is being produced for FX.

Sigourney Weaver had been an unknown before becoming the butt-kicking alien slayer in the late 1970s, leading her to have an amazing career. We are super happy that a sex scene was stricken from the script, as that might have messed up the entire feel of the movie. However, considering Alien is labeled a sci-fi and horror movie, a sex scene might not have been the craziest thing to happen.

Sigourney Weaver has not reprised her role as Ripley in quite a long time, but we are all hoping that she gets involved in the new Scott-created series. The actress might have also left that role behind, but she is still in the sci-fi space, as she is returning for the Avatar: The Way of Water sequel. Some might say that the movie is more fantastical than sci-fi, but we would argue that it is both.

While some of you might be bummed that Alien took away its sex scene, you can still be happy that the face huggers exist in the franchise. They sort of have sex with their victims, which results in those victims suffering a horrific death when the xenomorphs come bursting out of their chests. We are sorry to put that image in your head, but it had to be done. 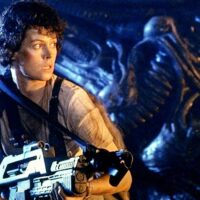 A Medieval Russell Crowe Action Movie Is Trending On Netflix

Alien Reboot On The Way With Pacific Rim Star