Brad William Henke, who many will recognize via his time on Netflix’s hit prison comedy drama Orange is the New Black, has passed away. A staple during the show’s fourth season, Henke’s easy-to-hate prison guard Desi Piscatella held a special kind of disdain for Kate Mulgrew’s Big Red and was the driving force behind the heartbreaking death of fan-favorite Poussey Washington, a character played by The Handmaid’s Tale star Samira Wiley. According to TMZ, the former NFL footballer-turned-actor passed away in his sleep on Wednesday. He was 56-years-old.

Prior to his time on Orange is the New Black, Henke was a member of the Denver Broncos with one of his career highlights being that he played in Super Bowl XXIV, a game that would see the Mile High City team lose to the San Francisco 49ers. After making an exit from the sports world in 1994 due to injuries, Henke set his sights on showbiz pursuits. With roles in a number of ventures other than Orange is the New Black, it’s incredibly likely that you’ve spotted Henke’s face in several other productions.

The actor nabbed parts on Dexter, Sneaky Pete, Bones, Lost, Criminal Minds, ER, Grimm, CSI, Hawaii Five-O, and MacGyver. Most recently he appeared in Law & Order: Special Victims Unit as well as Paramount+’s miniseries The Stand. His performance as the world’s most brutal prison guard on Orange is the New Black was certainly a standout that left audiences with a new character to detest, and one of the only personalities without much of a saving grace.

Along with his face popping up on the small-screen, the Orange is the New Black actor also worked on several larger productions over the years, adding his name to the call sheet on features including Gone in 60 Seconds, Pee-wee’s Big Holiday, Space Jam, and Arkansas. This year, he appeared in Dawn Wilkinson’s Block Party, with his final performance being posthumously in the upcoming thriller, The Ray.

Over seven seasons, Netflix found much viewership success in their series Orange is the New Black. The show centered around the story of Piper Chapman (Taylor Schilling), a well-to-do woman who finds herself behind bars for a drug running operation that she thought was all in the past. Upon arriving at prison, she discovers that her ex and fellow drug trafficker, Alex Vause (Laura Prepon) is serving time at the same facility.

With the drama between the ex-couple just being the start of it, Piper soon finds herself learning and playing by a new set of rules that seem to change daily, and surviving alongside the other women who call the minimum-security lockup home. The series did a good job in following the stories of not only the leading ladies, but also the other women serving time, leading to a lot of fan-favorite stories. Along with Prepon, Schilling, Mulgrew, and Wiley, Orange is the New Black also starred Uzo Aduba, Danielle Brooks, Natasha Lyonne, Taryn Manning, Dascha Polanco, Yael Stone, Selenis Leyva, Laverne Cox, Elizabeth Rodriguez, and Lea DeLaria among others.

In a statement regarding Henke’s death, his manager Matt DelPiano said of the Orange is the New Black alum, “Brad was an incredibly kind man of joyous energy. A very talented actor, he loved being a part of this community… and we loved him back.” At this time, we’re sending healing to Henke’s loved ones. 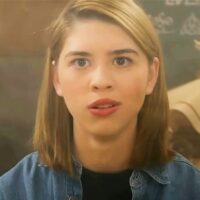 That ’90s Show Fate Has Already Been Decided By Netflix