Uncle Ben’s rice and food products have been a staple of grocery store shelves for nearly 80 years. Now, the iconic brand has changed its name and logo in order to better represent the racial standings of modern-day culture.

Parent company Mars Inc. revealed that Uncle Ben’s will now be labeled as Ben’s Original. The logo has also been converted to only feature text. Originally, the brand featured an illustrated image of an older Black man, the titular Uncle Ben.

Mars Inc. had announced the decision to rebrand and rename Uncle Ben’s back in June 2020, shortly after Quaker/PepsiCo had made their announcement to change the name of their line of Aunt Jemima pancake syrups, mixes, and breakfast foods. While Quaker/PepsiCo has yet to integrate their changes, Mars Inc. has fast-tracked its rebranding. However, they have announced that a replacement logo is in the works. For the time being, the Ben’s Original line of products will ship without a logo.

With racial tensions at an all-time high in the United States, corporations are looking at their bottom dollar and seeing what changes they can make in order to better appease consumers with an understanding of how racist stereotypes have been utilized in popular culture over the years. Uncle Ben’s joins other brands and entities such as Aunt Jemima and the Washington Redskins in dropping imagery and names that are associated with racist stereotypes.

Uncle Ben’s logo and name often drew criticism and parallels to Black servitude and the term “Uncle Tom,” a derogatory moniker derived from Harriet Beecher Stowe’s 1852 novel, Uncle Tom’s Cabin. The epithet became associated with subservient people who are betraying their own group in order to appease another overlord entity. It has become especially effective and hurtful when used to describe Black citizens that kowtow to institutions or individuals that perpetuate oppression against Black communities and persons.

Of course, the change to Uncle Tom’s branding is likely to create manufactured fervor over ideas of unchecked progress. An online petition cropped up earlier this year when the changes to Aunt Jemima and Uncle Ben’s were announced. It should be reiterated that these companies made these rebranding decisions on their own and were not forced by any particular outside entities to do so.

Uncle Ben’s logo was supposedly modeled after a real-life Chicago maître d’ named Frank Brown. Mars Inc. even came up with a fabricated backstory for Uncle Ben, saying that he was a well-known and highly regarded rice grower who gained a solid reputation for the quality of his rice. The character was even promoted to chairman of the board in an advertising campaign back in 2007.

We will see if other corporations follow suit with any other potentially offensive and racially motivated branding. As of now, Uncle Ben’s is no more but Ben’s Original will still be going strong. Hopefully, this will lead to fewer instances of Peter Parker feeling depressed whenever he has to go to the grocery store and pick up some rice for Aunt May. 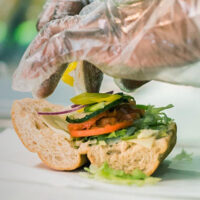