Nothing says “hello” like a good topless bikini photo or two. Just ask those who are following (a.k.a. obsessing) actress Sofia Vergara on Instagram. The Modern Family alum decided to post a couple of Throwback Thursday pics from the ‘90s to the delight of her many, many followers.

Check out the shots of the unbelievably gorgeous Sofia Vergara:

These may be some of the earliest pictures of Sofia Vergara posing in the buff, or half-buff as it is, but they are not the only time the actress has removed her clothing for the camera lens. It goes to note though that her posting of these throwback delights pretty much broke the internet over this past weekend. In short order (let’s call it three days) she has received over 713,000 likes. That’s a lot of smiley faces.

Back to the subject at hand, Sofia Vergara and her brushes with nudity. Throughout the years, the world-famous Colombian actress has appeared in many movies, stood in front of countless cameras but has never given up the full monty. Even her topless poses have been strategic, much to the chagrin of her followers.

In her movie career, Sofia Vergara started with Big Trouble, the Tim Allen-led movie that opened the eyes of many a male even though she revealed little. She found herself sporting red lingerie in Chasing Papi and then added more sexiness in Four Brothers.

The remainder of Sofia Vergara’s feature film career, to date, has been much of the same. Machete Kills, Hot Pursuit, Bent, Bottom of the Ninth, they all show Ms. Vergara in various stages of undress. Props to her for not giving it all away.

In 2017, the celebrated actress appeared in the first-ever Women’s Health global Naked issue, that had her posing fully nude (but carefully photographed) on the cover. You can see that Sofia Vergara cover right here:

The issue covered eight female public figures, Sofia Vergara being one. They were led into the photoshoot and interview with a simple prompt, “My naked body is…” and were then left to answer.

Sofia Vergara’s description was amazingly honest and on point, “My naked body is… I don’t know. What do you say? I don’t know if I’m strong. I have bad knees and very thin bones; I can barely do a pushup. I wish I could be a little bit more athletic, but when you’re born with these gigantic boobs… I’ve had them since 13, and then they got bigger when I was pregnant and had the baby. I’m 45. Even if you want to, at this time in your life, you can’t be perfect. It’s not that you hate it, or that you’re upset about it, but it is our reality. We’re changing. I see it happening to me. I want to look my age, but I want to look great. I think if you are obsessed with this ‘I want to look younger’ thing, you’re going to go crazy.”

Not only does Sofia Vergara speak and live those words, but she is also trying her best to help other ladies across the globe feel the same way. She, along with fellow Colombian Renata Black, co-founded EBY, an intimate clothing line in which the two women not only want to make other women around the world feel good about themselves but also want to give these women the power to create some real impact.

To help create this possibility, 10% of EBY’s proceeds will be donated by Sofia Vergara and Renata Black to microfinance the efforts. Along with helping women feel great about themselves in these wonderfully made undergarments, women who subscribe to EBY also receive power toolkits that contain both inspirational stories and advice that touches every part of their lives.

Breaking the internet and helping women across the globe. Thank you, Sofia Vergara! 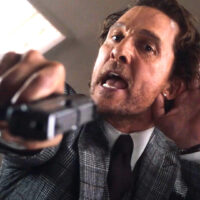 Matthew McConaughey’s Dad Died Doing What He Loved, Having Sex