Among other things, the entertainment industry’s awards show season is a time for the brightest stars of Hollywood to show off how well they clean up, usually with the help of the world’s most esteemed fashion designers. The British Academy of Film and Television Arts –or BAFTA — held its awards show this past weekend, and while she needs no help to look gorgeous, House of Gucci star Salma Hayek showed up in a present from the titular designers. Unfortunately, on the red carpet, the actress suffered a pretty serious wardrobe malfunction, but she handled it like a pro and looked amazing while doing it.

Salma Hayek shared the funny moment to her Instagram feed on Monday. The split image shows Hayek in a stunning purple velvet gown just as a gust of wind grabbed the gown, revealing the thigh-high slit and coming close to revealing a lot more. In the other half of the image, you can see Hayek acting fast to cover everything up. She captioned the photo with “Sometimes in an effort to cover something other things show up more. A veces por tapar unas cosas otras se enseñan mas.” You can see the images below.

Believe it or not, this isn’t the first major wardrobe malfunction Salma Hayek has suffered this awards season, nor is it even close to being the most serious. At the end of February, Hayek was at the Screen Actors Guild (SAG) Awards to present the award for Best Actor in a TV Movie or Limited Series when, as Today notes, she got stuck in the bathroom with Fran Drescher of The Nanny fame. Her glove got stuck on Drescher’s dress shortly before Hayek was due on stage to present the award. Hayek posted a video of the hilarious moment to her Instagram, showing an unidentified woman struggling to free the actresses’ wardrobes from each other. You can watch the video below.

What’s even funnier is that while Salma Hayek managed to get to the stage on time, the guy she presented the award to didn’t. The award went to Michael Keaton for his performance in the Hulu miniseries Dopesick, but when Hayek announced the actor’s name, he was nowhere to be found. After Hayek said, “Come on Michael! Come on Michael!” the iconic Batman star finally showed up, mentioning in his acceptance speech that he had been delayed by a busy men’s room.

Speaking of being just a little bit late to something, just this week we learned Salma Hayek would be reprising a role she hasn’t visited in over a decade. Hayek will once again voice Kitty Softpaws — a role she first assumed in 2011’s Puss in Boots — in this year’s Puss in Boots: The Last Wish. Antonio Banderas will reprise the lead role and they will be joined by a new cast including Harvey Guillén (What We Do in the Shadows), Florence Pugh (Black Widow), John Mulaney (Spider-Man: Into the Spider-Verse), Olivia Colman (The Lost Daughter), Samson Kayo (Timewasters), Ray Winstone (The Departed), Wagner Moura (Narcos), Da’Vine Joy Randolph (Dolemite Is My Name), and Anthony Mendez (Jane the Virgin). 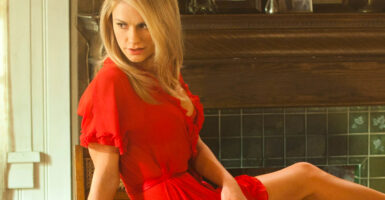