Pete Davidson And Kim Kardashian – Is The Break-Up For Good?

Pete Davidson and Kim Kardashian had a whirlwind romance but now they are broken up. It doesn't appear they are planning to get back together.

By Rick Gonzales | Published 2 days ago

Related:
Kim Kardashian Is Charged With A Million-Dollar Crime By The Government

Let’s see if we can figure out this unlikely pairing. From that infamous first kiss to exactly what went wrong with Kim’s short-lived romance with the Saturday Night Live star.

PETE DAVIDSON AND KIM KARDASHIAN CALL IT QUITS IN AUGUST. THERE’S BEEN NO TALK OF GETTING BACK TOGETHER

Things went awry as the two began spending time apart for work. Over the summer, Pete spent much of his time in Australia filming Wizards!. While Kim did make a quick trip to see him, she was busy with her own schedule and four children back in LA. Sources began claiming Pete Davidson and Kim Kardashian officially called it quits sometime in August

There was a lot of confusion over the split. Both parties remained relatively silent neither confirming nor denying the claims for a while. But at the beginning of September, Kim finally spoke out about their breakup.

Talking with Interview Magazine, Kim confirmed their split but had nothing but nice words to say of her ex-boyfriend. “He’s literally such a good person, they don’t really make them like him anymore,” she exclaimed. But still, she kept mum over just exactly what led to the ending, or who exactly initiated it.

As for Pete Davidson, the celeb has stayed pretty silent regarding the Kim Kardashian break-up. After news broke in early August, he was spotted wearing a shit reading, “What… I feel like s–t,” which pretty much summed up his viewpoint on the matter. But newer reports suggest that he is handling the split better now.

A source close to Pete Davidson told Hollywood Life that he was in a “much better place” in September. The source also alleged that the pair do not talk anymore. Now that it has been a few months since their split, fans of the ex-couple eagerly await to see what love interests both parties may spark up next.

It would appear this break-up is for good with neither side moving towards getting back together.

While they are now broken up, how they got there has some crazy twists and turns along the way.

Pete Davidson and Kim Kardashian actually met a couple of years before the heat would be turned up a few degrees. Their first meeting came at a birthday party for rapper Kid Cudi. At the time, Kim was married to Kanye West and when she posted pics to her Instagram account, in them were Cudi, West, Timothée Chalamet, and yes, Pete Davidson.

Davidson has long cited Cudi’s music as being influential to him as a young person, even claiming it helped save his life. Fast forward to October 10, 2021, when Kim Kardashian was the host of Saturday Night Live. Being a good sport, Kardashian got in some good ribbing about her family, which isn’t a tough feat to accomplish, but the highlight of the show came when she and Davidson appeared in a sketch together.

Davidson was Aladdin and Kim was Jasmine and they took shots at Kim’s dating preferences and that “size matters.” But the highlight of the sketch came towards the end when Aladdin and Jasmine locked lips for the first time. “Little” did we know then that this could lead to Pete Davidson and Kim Kardashian’s love and tattoos.

KIM KARDASHIAN WASN’T LOOKING FOR LOVE WITH PETER DAVIDSON, BUT QUICKLY FELL FOR THE SNL STAR

That little kiss got Kim Kardashian thinking. To her, there was a spark, but she didn’t get the same feeling that Pete felt that way. She explained herself on an episode of The Kardashians.

“So, this is how it went down with Pete. I did SNL, and then when we kissed in scene, it was just a vibe,” she said via Bazaar. “And I was like, ‘Oh, sh*t. Maybe I just need to try something different!'”

She was interested in testing the waters “But Pete does not come to my after-party—everyone was at my after-party—[he] does not give me the time of day, so a few days later, I called the producer at SNL and was like, ‘Hey, do you have Pete’s number?’ And they were like, ‘Yeah,'” she explained.

“I text him. I wasn’t even thinking like, ‘Oh my God, I’m gonna be in a relationship with him.’ I was just thinking, ‘Heard about this BDE, need to get out there, I need to jumpstart my …'” and then she added, “I was just basically DTF.” So, for those of you keeping score at home, BDE is short (no pun intended) for Big D*ck Energy. DTF, for those of a curious nature, means Down to F*ck.

In all seriousness though, it wasn’t just the thought of Schlong Kong that had Kardashian hot and bothered. It was the “just normal” stuff that came along with the package, so to speak. As she explained to her sisters on The Kardashians, “I never knew you can be just so happy watching TV series and going to the gym [with] someone I thought had never even gone to the gym or been to the gym before,” she said.

Later, she added, “Pete has got to be literally the best human being I’ve ever met, like the best heart. People always say, ‘Oh, he’s so funny.’ … That’s like, fourth on my list of why I like him. Always wants the best for people, can handle anything, always does it with grace. He’s really, really thoughtful, and humble, and just so genuine. I would say the perfect word to describe Pete is genuine.”

Maybe there is more to Pete Davidson than meets the eye and we are not talking about the banana hammock; if it’s bursting at the seams or not. Looks can be deceiving and there are many of us who see a body filled with tattoos and a face like death warmed over and we immediately think the worst. According to Kim, this is not the case at all.

This time it was late October 2021 and the tricks and treats were out in abundance. So was the PDA displayed by Pete and Kim. They were spotted at Knott’s Berry Farm, a theme park in So. Cal, during the park’s Knott’s Scary Farm.

The pair found themselves on one of the theme park’s roller coasters and it was the handhold that took the internet by storm. After that, it was a “secret” dinner in Pete Davidson’s neck of the woods, Staten Island. The couple was spotted at Campania and while they were enjoying some alone time, the paparazzi let them know they were not truly alone.

Next came another hand-holding incident as Pete Davidson and Kim Kardashian were spotted in Palm Springs, hands locked. They were beginning to look much more comfortable together. As more time passed, there were more sightings of the two.

There was the Flavor Flav Instagram that almost served as an official Pete-and-Kim-are-a-couple notice. In December, they were spotted going to see Spiderman: No Way Home. Finally, the pair truly made news when they snuck off to the Bahamas together. Even more news was made when Kim began posting their exploits on her Instagram account.

If you have actually seen Pete Davidson without a shirt, you couldn’t imagine there would be any more room for another tattoo, but you’d be wrong. Showing just how serious things have turned for the couple, Kim Kardashian took to The Ellen DeGeneres Show to reveal a couple of new tats Davidson recently got. “He has a few tattoos, a few cute ones that he got [for me],” Kardashian told Ellen via US Magazine. One of the “cute ones” reads “My girl is a lawyer” and another one appears to celebrate Kim and her children as he tattooed all their first initials on his neck.

While there were many who celebrated the pairing of Pete Davidson and Kim Kardashian, not everyone found pleasure in it, especially Kanye West, Kim Kardashian’s ex-husband. With Ye (as he likes to call himself), Kim has four children – North, Saint, Chicago, and Psalm.

When the word finally began to spread that yes, there was a real relationship between Kim Kardashian and Pete Davidson, Kanye West was less than pleased. He went into attack mode and Davidson was, what he thought, an easy target. No one could one-up Kanye West.

You have to give Davidson credit, though. He stayed silent for a long time. He let West take his potshots and never said a word.

It could be for the fact that Davidson very rarely touches social media. It could also be he didn’t want to make life any more difficult for Kim and her children. But we all have our limits sometimes and Davidson had reached his.

In a series of Instagram posts that Ye posted to his own Instagram account and that has since been deleted (probably for good reason), Davidson finally went after West. Davidson took to his friend’s, Dave Sirus, Instagram and he (Davidson) and Kanye had a not-so-private tête-à-tête.

In the exchange, Davidson says he’s finally had enough and that he wasn’t going to let Kanye “treat us this way anymore and I’m done being quiet.” Kayne responded with, “oh you using profanity” (Davidson did), and then Kanye asked Davidson “Where are you at now?” Davidson promptly responded with “In bed with your wife,” and it was on.

While it is clear that Davidson has had enough of Ye’s antics, it also appears that Davidson was trying to offer an olive branch as well. Unfortunately, West didn’t take it. The entire exchange can be seen below.

Although Davidson doesn’t care to speak about Kanye West often, he did decide to take to a very public forum to remark about the situation. Davidson went on Netflix is a Joke: The Festival and spent a few minutes going over what he called, “a really weird year.” The comedian then went on to talk about his “AIDS scare” and then went on to explain the scare was because “Kanye told me I had AIDS. And he’s a genius so I was like, oh, f*ck. I was like, I better call my doctor.”

Thankfully, Davidson said, “the doctor said I don’t have AIDS, I just look like I have it.” Davidson did go on to speak a bit more on Kanye and you may even find it funny. You can check out his standup below.

Pete Davidson and Kim Kardashian made their couple’s red carpet debut at the 2022 White House Correspondents’ Dinner in Washington D.C. The couple looked dapper (well, Davidson did, Kim looked dazzling) as they showed some hefty PDA on the red carpet.

Through the remaining months of their relationship, Pete Davidson maintained his Staten Island residence while Kim Kardashian has hers on the West Coast. For a while, they appeared to make it work from the opposite coasts. They continued their romantic globetrotting escapades, with Davdashian (Karvidson?) spending time in London.

But now it has come to an end for the pair. Though in Hollywood, these things have a tendency to spark back up at some point. 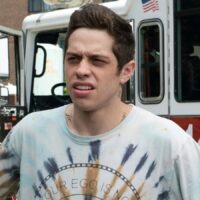 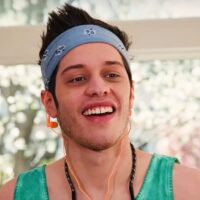 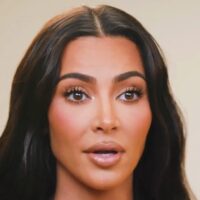 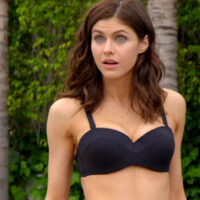 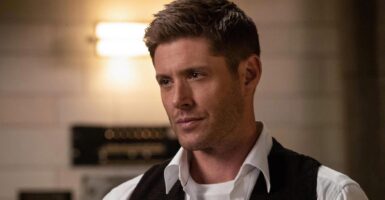 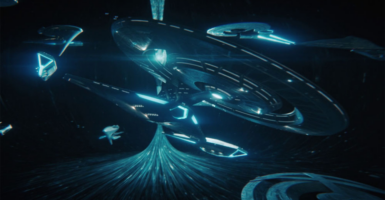 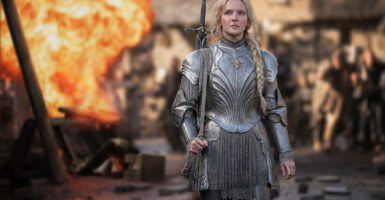