What Morena Baccarin deems “Just a Wednesday” is something we save for special occasions, or since the pandemic, rare events. Donning an intricate and gorgeous dress, the actress took to Instagram on hump day to share with followers just how she celebrates the middle of the week. The garment dazzles in silver, gray, and black tones as Baccarin strikes a pose while leaning up against a doorway. Although, what would a gown be without a full look? Hair impeccably placed, the Deadpool actress adds to the shine with a pair of silver earrings dangling from her lobes.

Using her platform for a wide array of content and looks into her life, Morena Baccarin has never shied away from putting herself on display. Along with her latest pose, the actress’s social media account is home to more perfectly modeled looks, whether that be in long, colorful gowns or black and white glamor shots, as well as promos for her new film projects, her dedication to political and social causes, and her “everyday” life with hubby, Ben McKenzie. It’s all a total hodgepodge that really treats fans to the woman at the center of it all.

With a career spanning over two decades in television and film, Morena Baccarin has made her mark on the entertainment industry, specifically for her roles in action-based performances. Early fans will know her from the Fox space-western series, Firefly. Directed by Joss Whedon, the series only ran for one season on the network before being canceled. Although the run was short, it was strong enough to gain a loyal fanbase who demanded more stories surrounding the lives of the crew aboard the spaceship, Serenity. And they got just that when Whedon made his feature directorial debut with Serenity. Bringing back the same actors from Firefly, Baccarin joined ranks to reprise her role as Inara Serra. Though by no means did it smash the box office, it sits today with an 82% critics and 91% audience rating on Rotten Tomatoes, proving the fans really showed up for their beloved space drama.

Following her time on Firefly and Serenity, Baccarin would go on to hold one-off roles in shows including How I Met Your Mother and The O.C. Success really came for Morena Baccarin when she was cast in Showtime’s hit drama, Homeland. Appearing as Jessica Brody, the wife of an ex-prisoner of war, Baccarin would go on to receive critical acclaim for her part in the show, leading her to receive a nomination at the 2013 Primetime Emmy Awards. Another hit came her way when she appeared in the crass, high-action Marvel comics-based film, Deadpool. Baccarin shined opposite Ryan Reynolds and would go on to reprise her role as Vanessa Carlysle once again in the movie’s 2018 sequel, Deadpool 2. The year before the first Deadpool took on big screens everywhere, the actress picked up what would turn into a five-season run as Dr. Leslie Thompkins in the Fox series, Gotham. There, she would star opposite her future husband, Ben McKenzie in a story based around Batman character, James Gordon.

Currently, fans that want to see Morena Baccarin outside of her Instagram presence can catch her in the new film, Last Looks, which is currently available on demand. On the television side of things, the actress just hit the ground running in the new NBC series, The Endgame, where she stars opposite Ryan Michelle Bathé. No matter how you cut it, Baccarin is sure to wow whether it be in a beautiful dress on Instagram or as the leading lady in Hollywood’s next blockbuster hit. 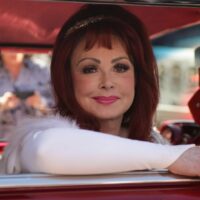