Megan Fox is one of the world’s most glamorous women, and she has the social media presence to prove it. In a recent post to her Instagram account (which currently has over 20 million followers), the Transformers star shows off a gorgeous, slinky gold dress alongside her fiance, musician actor Machine Gun Kelly in a series of photos of them presumably backstage at one of his concerts. Megan Fox is known for her enigmatic yet sexy Instagram posts, but this set seems to be a little slice of her and Kelly’s famously odd personal lives.

The photo set posted on Megan Fox’s Instagram account starts with the New Girl actress and the pop-punk musician holding each in their trademark slightly-uncomfortable public intimacy, Kelly’s latex-clad hands wrapped around her dark red hair. The second follows with a more traditional paparazzi-style shot of the pair stepping through a doorway, which reveals that Machine Gun Kelly appears to be wearing an all-black latex outfit with a cut-out chest showing off his tattoos and kind of corset.

We also get to see Megan Fox’s outfit in full, which reveals it to be an incredible metallic gold, low-cut cocktail dress slight all the way to her hip to show off an incredible expanse of bare leg. Between her bright red hair and incredible curves, Megan Fox is giving off color-swapped Jessica Rabbit vibes, which hopefully will be repeated come whatever her Halloween costume is going to be.

The third image in the set is a somewhat over-exposed video in which Megan Fox and Machine Gun Kelly stare straight to camera, while the latter does a quick bit of magic fingers before briefly grasping at his fiance, who laughingly tells him not to mess up her makeup. The final two pictures in the set show the pair walking hand in hand, and while both photos seem to be candid, they cannot disguise the poise and grace of Megan Fox.

Megan Fox has a number of upcoming projects, including appearing in the next installment of Sylvester Stallone’s Expendables franchise in 2023. While Megan Fox’s role in The Expendables 4 is currently undisclosed, she is going to be joining action movie royalty like Jason Statham, Dolph Lundgren, Tony Jaa, and, of course, the Tulsa King himself. In recent years, she has been increasingly moving towards action-oriented roles, so it was likely inevitable that she would appear in the series eventually.

Megan Fox will also be appearing in the upcoming film Johnny & Clyde, directed by actor Tom DeNucci. The film reportedly involves two serial killers (Avan Jogia and Ajani Russell) on a crime spree that leads them to a casino run by Megan Fox and her demonic enforcer; it sounds like a pretty high-concept film, but Fox and Kelly’s relationship has definitely indicated that she gravitates to projects that involve doomed lovers.

Finally, Megan Fox will perform voice work as a golden dolphin princess in the animated film Naya Legend of the Golden Dolphin, alongside Gerard Butler, Elliot Page, and Kate Winslet. 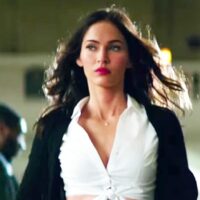 See Megan Fox Busting Out Of A Skin-Tight Red Dress