When it comes to making the list of Hollywood’s most peculiar couples, Megan Fox and Machine Gun Kelly undoubtedly deserve the top rank. The duo has been dating since 2020 and made their relationship public after it became official that Fox had ended her marriage of 10 years with Brian Austin Green. Anyone who has been closely following the couple’s relationship timeline is already aware of how…enigmatic their courtship has been. And the actress has continued this trend in her engagement announcement as well. Yep, Fox and Kelly are engaged and they apparently sealed this union by drinking “each other’s blood.”

Megan Fox shared this personal update in the video below. Check the caption for the “…and then we drank each other’s blood” update.

Megan Fox took to Instagram to share the big news that her boyfriend Machine Gun Kelly has finally proposed to her after they have been dating for more than a year. In her post, the Jennifer’s Body actress shared a video of Kelly kneeling under a banyan tree and romantically proposing to her. She revealed that in July 2020, the couple had met under the same tree and “asked for magic.” And while they have faced a lot of pain and made many sacrifices in the short period of time they have been together, they are “intoxicated off of the love.” Megan Fox further added that in the year and a half they have been in a relationship, they have “walked through hell together” but also “laughed more than I ever imagined possible.”

“And just as in every lifetime before this one, and as in every lifetime that will follow it, I said yes.…and then we drank each other’s blood,” Megan Fox concluded. Yep, blood. But while the fans of the couple are well aware of the offbeat dynamics of the relationship Fox and Machine Gun Kelly share, “drinking” each other’s blood may be taking it too far even for the Midnight in the Switchgrass stars. Perhaps the actress made the last comment in jest or to signify the surety of the promise they have made to each other. It wouldn’t be the first time this kind of thing has happened with celebrity couples.

Machine Gun Kelly also took to Instagram to share the announcement of their union and also revealed the unique emerald-diamond engagement ring he got for Megan Fox. In his post, Kelly shared that as the two had fallen in love under the same banyan tree, he made sure to bring her back to the same spot when he decided to finally tie the knot.

Kelly also explained the significance behind the engagement ring, designed by famous British jewelry designer Stephen Webster. He shared that while engagement rings are supposed to only have one stone, he asked for two. One is an emerald, which is Fox’s birthstone, and the other a diamond, which is Kelly’s birthstone. He got them set together to signify that he and Fox are “two halves of the same soul forming the obscure heart that is our love.” Check out his post below:

Megan Fox and Machine Gun Kelly met on the sets of the thriller film, Midnight in the Switchgrass. While the Randall Emmett-directed film was massively panned by critics upon its release, it did serve as the platform from where Fox and Kelly’s love story took off. It was soon followed by rumors that the actress had separated from Brian Austin Green and a cryptic post from the latter on her birthday before it was officially confirmed. Fox and Kelly made their relationship Instagram official by July 2020, soon after she appeared in his Bloody Valentine music video. 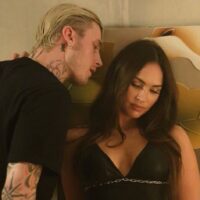