While some celebrities shy away from social media altogether, many use it to promote their upcoming projects. Kate Beckinsale uses her Instagram to give audiences a look at the more playful sides of her personality. She recently attended an event for the launch of designer Christian Siriano’s new book, Dresses to Dream About. While she did share the more typical press photos of herself in a mini-dress with a ruffled sleeve, she first shared a photo of herself in the dress still in her home, shushing her cat and posing from the side.

You can see Kate Beckinsale in her home in the photo below.

For her followers who catch her every post, this photo is extra fun. Kate Beckinsale poses with her cat frequently, often using the cat to make playful jokes. Occasionally, she posts videos just of her cat, named Clive, who she frequently dresses up in little outfits. He has become an important and playful part of her social media presence and something that her fans look for. They also expect her to wear shocking and fun outfits. Sometimes she’s in high fashion, sometimes she dresses up in a demonic pope costume. She always seems to be having a great deal of fun with her social media.

Kate Beckinsale did share more serious photos from the event, which better show off her dress. Below, you’ll want to click the arrow on the right in order to see her full photo reveals. In the first one, she gives a better look at the dress, with one huge ruffled floor on the sleeve. In the next photo, she poses with the designer for the event, Christian Siriano, who became well known after his win on Project Runway. The third photo appears to show her at the after-party hanging out with other celebrities like Alicia Silverstone, Selma Blair, and Leslie Jones. The next photo appears to have Kate Beckinsale saying something that makes them all laugh. Following her Instagram makes it seem like that would be easy for her to do.

When Kate Beckinsale isn’t winning fans hearts via her Instagram, she is an actress. She recently starred in the movie Jolt on Amazon Prime. The film starred Beckinsale as a bouncer with an anger management problem. The story allowed her to use her history as an action star in movies like Underworld for fight scenes, while going a little further with violence and rage. The movie has been met with mixed reviews.

Also this year, she has starred in her own series, Guilty Party. The Paramount+ show stars Kate Beckinsale as a disgraced journalist trying to rebuild her career. It’s a dark comedy and her character has selfish motivations as she finds a prisoner she decides to prove innocent. Guilty Party began releasing on the streaming service in October 2021 and is also being met with mixed reviews. She currently has two movies in post-production, El Tonto and Prisoner’s Daughter. 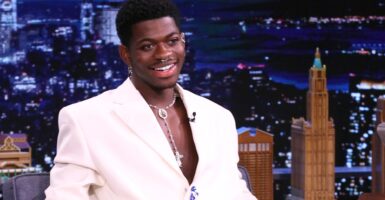