Joseph Quinn – Is The Stranger Things Star On Instagram?

Joseph Quinn had a star turn as Eddie Munson on Netflix's Stranger Things, and he's accrued a massive following on Instagram

Joseph Quinn has jumped on that rocketship called fame. His portrayal of Eddie Munson on Stranger Things has shot the star into the outer reaches of space and is seriously threatening to become a household name. So, where did Joseph Quinn come from, and just where is he going?

Before Quinn found an audience with his portrayal of Eddie Munson, his social media presence was a little bit on the light side. But ever since Eddie Munson jumped into the mainstream, Joseph Quinn’s following has grown by leaps and bounds. Although he doesn’t post as often as his fans wish, Quinn does have more to 8.4 million followers on Instagram.

On his account, there are a number of different fashion shots like the one above and then there are pieces from Stranger Things, of course. Below, check out what it took for him to become Eddie Munson.

JOSEPH QUINN IS 28 YEARS OLD AND WAS BORN IN LONDON

Joseph Quinn was born on January 26, 1994 in London, England. Quinn was raised in South London where he went to the independent school, Emanuel. While there, Quinn earned a bursary, or a scholarship, while going through their drama scholar program that allowed him to attend the London Academy of Music and Dramatic Art.

Quinn graduated from the London Academy of Music and Dramatic Art in 2015 and immediately jumped into acting. It was an auspicious start, with a full-on British flavor to it, but one that took him exactly where he needed to go.

JOSEPH QUINN HAD A ROLE IN GAME OF THRONES

Believe it or not, before Joseph Quinn was cast as Eddie Munson in Stranger Things (more on that in a bit), he was once part of a series that could be considered even bigger than Stranger Things. Quinn had a role in the juggernaut called Game of Thrones. Before we get to that, though, here is what led Quinn to GoT.

Although Joseph Quinn graduated from the London Academy of Music and Dramatic Art, his very first role on film came in the British TV series called Postcode. This was in 2011 and it took Quinn another four years (right after graduation) to grab his next role. Quinn joined the British series Dickensian in 2015 and played Arthur Havisham for the series’ entire two-year run.

Not long after Dickensian ended its run, Quinn found himself on the biggest show in the world – Game of Thrones. Unfortunately, it was for a single episode, in which Quinn played Koner, a solider for House Stark. The appearance in the series was just one more stepping stone that helped Joseph Quinn continue his climb.

After his short stint on GoT, Joseph Quinn appeared in a number of British series. The first was Timewasters. He followed that up with the mini-series, Howards End. From there Quinn saw time on series’ such as Les Misérables, Catherine the Great, C.B. Strike, and Small Axe. In between these British TV series, Quinn made his feature film debut in the 2018 war horror film, Overlord and followed that up the following year with the feature, Make Up.

Although there was nothing on Joseph Quinn’s resume that screamed “big role on the way,” Quinn continued to put in the time. It was well worth it. Especially when he got the call from the Stranger Things creators, the Duffer brothers, that they wanted to bring him on board their show.

JOSEPH QUINN GOT HIS STRANGER THINGS ROLE JUST BY SENDING IN TWO TAPES, IN CHARACTER

According to Joseph Quinn, it was fairly easy landing the role of Eddie Munson. To start, Quinn only sent in two self-tapes of him in Eddie Munson gear. One leaned on Munson’s as a metalhead and the other showed his affinity for Dungeons and Dragons.

His appearance must have been exactly what the Duffer Brothers were looking for in Eddie Munson because it wasn’t long after the tapes were sent in that Joseph Quinn received a call of congratulations from his agent; Quinn got the role as Eddie Munson. Quinn was shocked at the speed and ease, telling Vanity Fair with some fun in his voice, “They just kind of gave it to me, which is bad. Normally, things are pretty gladiatorial in this game.”

Of course, Quinn’s time on Game of Thrones, as short as it was, had him fully prepared to jump onto a new, huge series, right? “I don’t think anything could have prepared me for it,” Joseph Quinn explained. “I only did two days on [Thrones]. It was obviously mad to be on something of that scale, but this one was much more collaborative. Apples and oranges.”

Because of Eddie Munson’s love for heavy metal and Dungeons and Dragons, Quinn took to listening to Black Sabbath and learning about the board game as a way to prepare himself for the role. He also chose to lose weight to get a younger look for Eddie, who in the series is 18 years old. “…I’m not 18, unfortunately, anymore!”

Those were easy fixes for Joseph Quinn. The bigger struggle was the fact that Quinn was decidedly British and had never appeared before in an American film as an American. He’d have to find himself an American accent.

Quinn worked with a vocal coach to perfect his American accent. As good as that went, Joseph Quinn also decided to keep his American accent in between takes. To truly nail it down, Quinn even stayed with the accent off the set as well.

“You feel like a sociopath just turning up in people’s native country and doing this voice,” he says. He would also test out his chops after leaving the set. “I would take the accent out for dinner and order in an American accent and feel insane. But it’s better to look like an idiot in front of your friends than, you know, loads of people.”

Perhaps the biggest compliment Joseph Quinn could get concerning his portrayal of Eddie Munson in Season 4 of Stranger Things happened earlier this summer when the actor conducted a Q & A at the Comic Con in London.

One fan rose from her seat and instead of asking Quinn a question, she posed a statement, telling him, “Hi, mine’s not really a question, it’s more an extension of gratitude really. “I’m sure a lot of us have heard what happened yesterday, whether it’s true or not, about how you were treated. I won’t really comment on it, I just wanted to say, thank you from all of us – we’re really grateful you’re sharing the time.” She then added: “Thank you for signing our things, spending time with us and making our summer. I think we’ve all connected with Eddie for one reason or another.”

Joseph Quinn was moved by her statement and found himself in tears when he responded to her kind words, joking, “Ah why did you do that.” Then he added: “That’s very kind of you, thank you for your kind words.” What the fan was referring to was an incident that happened the day prior when Comic Con staff would not allow Quinn to interact with fans.

According to the eyewitness of the previous day’s incident, “The day before, Comic-Con staff weren’t letting him interact with fans, sign autographs or do anything – they were treating him like a child.” Someone must have told the London Comic Con staff to back off because fans got everything they wanted from Joseph Quinn the following day and were very appreciative of his time. Obviously, Quinn was appreciative of their response.

You may be asking yourself, is that really Joseph Quinn playing guitar on Stranger Things? The answer to that is yes…and no. Quinn has been playing the instrument since he was around 7 years old, so the foundation was already there. But he has said on numerous occasions that while he can perform a lot of Eddie Munson’s guitar playing, he is nowhere close to the status of a truly professional guitar player. For the more complex stuff, Quinn has a stunt guitar player.

NEXT, HE WILL BE IN HOARD

So, where does all of this newfound popularity leave Joseph Quinn? We all know his Stranger Things fate, though fans are clamoring for another appearance (which many feel will happen). While the Duffers are figuring out what to do with Stranger Things’ fifth and final season, Quinn waits patiently. He has a new feature, Hoard, that will be out sometime in 2023, so until then, we wait with him. 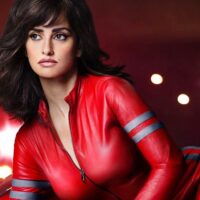 See Penelope Cruz Pose In Nothing But A Fur Coat