Jared Padalecki: With Supernatural Over, He Has Another Big Franchise

In the twenty-plus years Jared Padalecki has been in front of the camera he is known for precisely two things. This doesn’t mean he hasn’t had a successful career. On the contrary, those two things have made him quite a successful TV star. In fact, he has a third thing on the horizon that just may add to his success.

Here’s what Jared Padalecki is doing now that Supernatural is over.

Jared Padalecki’s career started fast. He first starred on the big screen in a baseball movie called A Little Inside and then made an appearance in a TV movie titled Silent Witness before jumping into the deep end. In 2000, Padalecki was cast in the hit series Gilmore Girls, where he was introduced in the pilot episode as Dean Forester, the new guy in town, and quickly catches the eye of Rory Gilmore (Alexis Bledel).

Of course, as life would have it on a soap opera, things get complicated for Dean and Rory as other characters are introduced. Rory’s sister Lorelai gets herself involved to add to the complication, eventually, things end up where the two split.

Jared Padalecki’s character was recurring in Gilmore Girls season 1, then becoming a main character in seasons 2 and 3. He went back to recurring status for seasons 4 and 5 and it was season 5 where Dean left for good, never to be seen or heard from again. Almost. Jared Padalecki made an appearance in the short revival of Gilmore Girls called Gilmore Girls: A Year in the Life where he reconnected one more time with Rory, the two acknowledging how their time together taught them a lot about life. When Padalecki’s time ended on Gilmore Girls, he moved right into thing two.

Jared Padalecki moved right into his next big gig immediately after his run on Gilmore Girls and this is perhaps what he is now best known for. We are talking about the hit CW show Supernatural created by Eric Kripke.

Supernatural first premiered on The WB network, which eventually became the CW. Jared Padalecki starred as Sam Winchester, brother to Jensen Ackles’ Dean Winchester, who were raised by their father to be a Hunter, usually humans who hunt down anything supernatural, demons, monsters, ghosts or any creature that poses a threat to humans.

Supernatural has enjoyed an extremely lengthy and popular run on WB/The CW. The show has lasted for fifteen seasons, with its final season airing this year. The Winchester Brothers backstories are quite involved, as this can happen in a series running for fifteen years. But its popularity is unquestioned with many fans asking for more, even when the series has not yet concluded.

The series was scheduled to conclude in May of 2020 but with the COVID shutdown, that date was pushed. The show eventually went on hiatus, only recently starting final production. The show is now scheduled to restart its 15th and final season in October, with the series finale set to close things down on November 18, 2020.

Jared Padalecki once stated his draw toward Supernatural was because of his love for horror movies. Not only did that reflect in his decision to star in the series, but also for some of the choices he made during the shows run. While pre-Supernatural, Padalecki was seen in features such as Cheaper By the Dozen, New York Minute (with the Olsen Twins), and Flight of the Phoenix, his movie career during his Supernatural time leaned more toward horror fare.

House of Wax, Cry Wolf, and House of Fears were part of his movie choices before he took the lead in the 2009 reboot of Friday the 13th. In it Jared Padalecki played Clay Miller, the brother of a young girl who has gone missing around the famous Camp Crystal Lake. He arrives with friends and his search for his sister begins. As this was a Friday the 13th movie, his friends begin to get picked off one by one. As far as Friday the 13th movies go, it could have been worse. They did have a few stinkers in the franchise (Friday the 13th Part VIII: Jason Takes Manhattan, Jason X) but it didn’t quite hit that level of stink.

For the most part, Jared Padalecki has been in the news for good reasons. He married his Supernatural co-star Genevieve Cortese in 2010 and the couple remains married and has three kids. He launched a T-shirt campaign called Always Keep Fighting through Represent.com in an effort to fight depression, something the actor has had to deal with in his past. But things got messy for the actor recently when he found himself under arrest.

This happened in his hometown of Austin, Texas where Jared Padalecki owns the bar, Stereotype. Padalecki allegedly had a bit much to drink and got into an altercation with two of his employees. During this verbal argument, Jared Padalecki hit both in the face.

In a video via TMZ, it shows Padalecki putting another man in a headlock. It was not a good night for Jared Padalecki. Police arrived and in another video clip, it appears that Jared pulled out a wad of cash in attempts to pay off the cops. He was eventually arrested and charged on three counts, two for assault and one for public intoxication. He was released on $15,000 bail, $5,000 for each count.

The arrest did not affect his filming of Supernatural and he reached out via twitter to thanks family and friends.

The video of his scuffle and arrest can be seen below.

With all that behind him and Supernatural coming to an end, Jared Padalecki’s still good relationship with The CW has led him possibly another big series. This would be the reboot of Walker, Texas Ranger, once made famous by Chuck Norris.

It will, of course, be a different take and look for the new Walker, but it will also follow the same themes as Norris’ version. Jared Padalecki showed off Walker’s brand in a tweet.

Let’s hope his run on this series lasts even half as long as his Supernatural run. 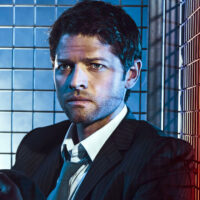 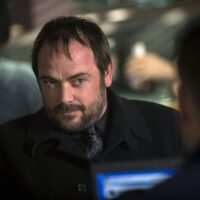