Christina Ricci has been a goth icon for years, and while she has expanded the range of her roles immensely since the first Addams Family movie, she seemingly has no problem going back to her roots. In a picture posted to her very popular Instagram account, Christina Ricci has gone full-spooky for a red carpet event, wearing a gorgeous and sexy transparent black dress with a spider motif. According to her caption, this was from the premiere of her upcoming Netflix series Wednesday, which has brought her full circle to her original breakout role.

As with many celebrities these days, Christina Ricci is quite active on social media and fills her Instagram grid with pictures of herself in amazing outfits, which range from her in a heavy gold collar to showing off a scandalizing amount of leg. In this particular picture set, Christina Ricci is wearing the Metallic Tulle Tiered Gown with Hand Beaded Spider by Rodarte, which would be stunning on anyone but looks spectacular on the original 1990s Wednesday Addams.

According to the tags in her Instagram post, Christina Ricci’s makeup for the Wednesday premiere was Allen Avendano, while her hair was styled by Mark Hampton, and the entire amazing outfit was styled by Alexandra Mandelkorn of The Wall Group. It takes a team of people to make anyone look this good, but none of it would work without the charisma of Christina Ricci at the center of it all.

The first picture in the set has Christina Ricci proudly displaying the transparent spider gown against the red carpet set, which seems heavy on purple lighting and bats. The second shows her arm in arm with husband, producer James Heerdegen (also known for his camera work on productions like Tom Hanks’ Captain Phillips and Michael Keaton’s Birdman). Next, we get the star again, now in a cocky, hand-on-hip pose to show off the whole package.

The fourth picture in Christina Ricci’s post shows her standing alongside Netflix star Jenny Ortega, who has taken on the role of Wednesday Addams in the 21st century. In the Wednesday series, Christina Ricci is playing a mysterious new character named Marilyn Thornhill, and while the trailers released so far have not revealed much about her so far, it is safe to say she may not be quite Wednesday’s cup of tea.

The fifth and final picture in the set has Christina Ricci with one of her other Wednesday co-stars, Gwendoline Christie of Game of Thrones and The Sandman. In the new series, Christie will be playing Larissa Weems, the principal of Nevermore Academy, the school Wednesday Addams has been sent to. It also seems she is a former school rival of Wednesday’s mother Morticia (played by Catherine Zeta-Jones), so she will also likely not be too friendly with Jenny Ortega’s character.

Wednesday premieres on Netflix on November 23, and we are certainly glad to get a little more Christina Ricci in our lives. For now, we’re also happy to have her in this dress. 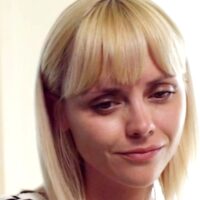