It’s an unfortunate part of Hollywood, especially when it comes to the women who are in front of the camera. Looks and bodies and actress Christina Hendricks has been dealing with the “body” part for the bulk of her career. It’s a shame because the lady can act.

Here’s where Christina Hendricks has been, what she’s been through in Hollywood, and where she’s going next.

Christina Hendricks’s career started out, as have many actresses, modeling. But prior to her modeling career, Hendricks was a high school student who hated high school. Nothing unheard of. But for Hendricks, it was her uprooting from her Twin Falls, Idaho town to Fairfax, Virginia that caused such hate. They were two very different ways of life, from a small-town feel where she could wear hippy dresses and Birkenstocks to a place where all the kids were having sex, wearing make-up, and were truly mean-spirited.

Christina Hendricks told The Guardian how cruel her Fairfax classmates were to her and others, “We had a locker bay, and every time I went down there to get books out of my locker people would sit on top and spit at me. So I had to have my locker moved because I couldn’t go in there… I felt scared in high school. It was like Lord of the Flies. There was always some kid getting pummelled and people cheering.”

This cruelty pushed Christina Hendricks towards acting. She focused her time in the drama department to escape the cruelty. She was able to escape, trying her hand at modeling. This she was good at.

She began modeling in New York, Japan, and London, where she ended up living for a period of time. She even was the hand model for the American Beauty poster. Upon her return to the states, her first focus was on the admin side of the music business, which she quickly figured out wasn’t going to work for her. Christina Hendricks then moved on to the acting side of the business and has been there ever since.

Christina Hendricks’s first work was in commercials. Dr. Pepper, Carl’s Jr. Then she got her first real acting gig in the TV series Undressed. From there she began a long strong of TV series and TV movies. She grabbed roles in Angel, a recurring role in Beggars and Choosers, Thieves, another recurring role in the hit show ER, The Court, and Presidio Med. She was also seen in the TV movies The Big Time and Hunger Point.

TV work was a constant for Christina Hendricks as she found time in a notable role on Firefly, Miss Match, and Tru Calling. She was a co-lead on the short-lived series Kevin Hill and then found time on Cold Case, Without a Trace, Las Vegas, and Jake in Progress. She obviously was getting a lot of attention and a lot of work. Which led to her big break and the most notable role of her career so far.

When Christina Hendricks was handed the pilot script for Mad Men she just knew she had to get the part of Joan Holloway. Not only did she think so, but so did her manager. Unfortunately for the actress, her agency did not think the part would help her career.

According to Christina Hendricks via The Guardian, “They said, ‘It’s a period piece, it’s never going to go anywhere. We need you to make money and this isn’t going to make money.’ They ended up dropping me.”

But to Hendricks credit, getting dropped didn’t faze her in the least. “I had been on several shows that were meant to be the big ones, that would go on forever, and they didn’t. So there was no sure bet and I’d already taken a chance on them and I felt, why not do the one you’re in love with and take a chance on that?”

It was a gamble that paid off unbelievably well for the curvaceous star. She recalled taking her best friend and her mother to the screening of Mad Men, worried to death that they just wouldn’t get it. “I turned to them and said, ‘Is it good?’ And they both said, ‘Oh yeah, it’s good.’ I said, ‘Is it boring?’ and my mother said, ‘No, but I didn’t like that he [Don Draper] was cheating on his wife at the end.'” Uh oh. Christina Hendricks knew then her mom probably wouldn’t like the show.

Mad Men was an immediate hit. The series was set in the ‘60s and followed a group of people who were part of New York City’s most prestigious ad agencies. Christina Hendricks played the office manager in a role that earned her much critical praise. She was nominated for numerous awards for her portrayal as Joan Holloway that included wins for Critics’ Choice Television Awards, Golden Nymph Awards, and Screen Actors Guild Awards.

The hit series ran for seven seasons in which Christina Hendricks played a part in each episode.

With all that critical praise, there is always seems to be some backlash. For Christina Hendricks, her backlash came with her body. She is at once curvaceous. Fiery red hair and a body to die for, it is her body that in many cases held Christina Hendricks back. She told the Times, “I auditioned for things where I knew I killed the audition. I knew I did. It was like. ‘Oh, should I give you my sizes now, or…?’ And they would call up and say, ‘We just don’t think that a doctor would look like that’. I would be embarrassed to even say that out loud. There should be a million different body types [on television]. It’s outrageous that there aren’t. And it’s outrageous that we’re sitting here having this conversation and it’s even a thing.”

But Hendricks has learned how to be comfortable in her own skin and it has not slowed her down in finding work. “I know I have a figure and I long ago decided that I wouldn’t starve myself and try to become one of those typically skinny actresses. I’m completely comfortable with my body.”

Christina Hendricks found a ton of work during her time on Mad Men and since it ended its popular run back in 2015, she has continued to work. Her resume has expanded as she has found much more time on the big screen than she had in the past. On top of the TV series’ Hap and Leonard, Another Period, Tin Star, and her recent shows Good Girls and Solar Opposites, Christina Hendricks has been seen in the features The Neon Demon, Bad Santa 2, Fist Fight, Egg, and American Woman.

Now 45-years-old, her personal life has also gone through some changes. Christina’s time with husband, actor Geoffrey Arend, came to an end as they separated back in April of 2019 and it recently became final. Christina Hendricks posted the news on her Instagram.

Christina Hendricks continues on though and that’s a good thing for all who follow her career. 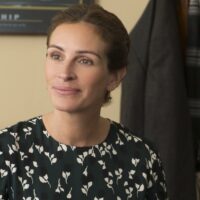