Chris Pratt and Chris Hemsworth engaged in a shirtless battle with one another on Instagram. Well, they didn't know they were doing that, but they did.

Without knowing it, or rather, by subtly coming at each other to show off their guns, Chris Hemsworth and Chris Pratt have engaged in a battle of shirtless photos. Both gentlemen are currently in great shape, and they showed fans their muscly figures on their social media pages. Pratt is currently the star of the series Terminal List, which is airing on Amazon Prime Video, which is likely why he is still having to remain in great shape. Hemsworth, as we know, is Thor. Seems he must always stay in shape. You can see the images of the subtle shirtless battle below:

We are not entirely sure why Chris Pratt is showing off a cut on his body, but we can be certain it is likely a behind-the-scenes photo of his new series. We doubt he would be ripped and showing off some special FX makeup to voice Mario. Chris Hemsworth, on the other hand, is doing a bit of promotion for a workout company. You can see this image below:

Chris Hemsworth is promoting a place called Centrfit and has tagged the company in the promotional shots from the above photo collection. Why is he promoting this place? Well, it is because that is his own workout company. Per the website, fans can use the same team that the Thor actor uses to get into great shape. Maybe Chris Pratt should be using this same type of training.

Although both gentlemen were likely not trying to battle one another, it certainly happened. However, in terms of likes, Chris Hemsworth is beating out Chris Pratt by a large margin. Hemsworth currently has over 2.6 million likes on his post. Pratt only has over 300,000 likes. In the battle of the shirtless photo likes, Pratt is losing by a lot. However, if we are judging the looks in the photos, we would say Pratt is winning. That is because he is showing off some great FX makeup. Hemsworth is just hilariously looking from side to side.

Chris Hemsworth and Chris Pratt were both recently in Thor: Love and Thunder, though we only got to see the Guardians of the Galaxy for a moment. There was no telling how ripped Pratt was in the film, as he is usually wearing his long sleeve Star-Lord coat. Hemsworth, however, was huge in the film. In fact, Hemsworth’s wife said the man was far too buff even for her taste. Looks like Pratt might be winning the muscle battle based more on his subtle muscles.

Related:
Chris Hemsworth’s Wife: Where He Met Her And How She Became An Action Star

Chris Hemsworth vs Chris Pratt comes down to lovability. Who does everyone love more? Both men are hilarious, and both men work well with one another. However, Hemsworth is in far better shape. Well, at least according to the above pictures. Pratt continues to get hatred based on the church that he has been associated with. We think the likes on the pics come down to that. So, it is a bit unfair. 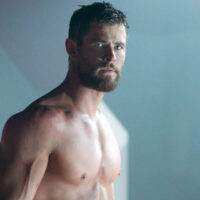 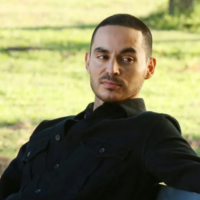