Bruce Willis Explains Why He Refused To Wear A Mask

Yesterday, we reported that Bruce Willis was seen in a California pharmacy refusing to put on a face mask. The 65-year-old actor was asked by a Rite Aid employee to put on a mask. Instead, he left the store without properly wearing one. The actor was photographed with a bandana around his neck. Today, he spoke to People and, by way of explanation, said, “It was an error in judgment.” The statement is vague enough to not really explain what that means. Generally, it sounds like Bruce Willis just didn’t want to, and now he’s caught. He added, as advice for the rest of us, “Be safe out there everyone and let’s continue to mask up.” With the ongoing COVID-19 pandemic continuing to hit California hard in recent weeks, many are rolling their eyes at the actor’s statement.

While the vaccine is beginning to roll out in California, and lockdown measures remain in place, the area still has a record number of cases. The state itself has 2 million COVID-19 cases. Over 930k of those are in Los Angeles, where Bruce Willis refused to wear a face mask. Currently, LA County is suggesting people who live with others who are vulnerable wear a face mask in their home. That may be a big ask when those who know better refuse to wear them in public spaces. It’s worth noting the 65-year-old actor may soon benefit from the vaccine. In California, they are currently looking at including those 65 and older in the groups being vaccinated.

Despite the high numbers in California, many celebrities have been anti-mask. While Bruce Willis has apologized, it doesn’t necessarily ring true amid anti-mask sentiments. It isn’t like he simply forgot to wear one. An employee brought the situation to his attention, and he chose to leave the store instead of doing something about it. It’s hard to believe that after so long in the pandemic, he just now understands that wearing a face mask is a good idea.

Of course, as the star of Die Hard, Bruce Willis has been faced with a lot of Twitter jokes referencing his most well-known franchise. Despite his statement, the tweets continue to roll in. The most popular joke is that the Rite Aid employee managed to do what Hans Gruber did not: kick Bruce Willis out of the building. It’s hard to say whether that means good or bad things for the rumor the actor is looking to star in a Die Hard 6.

Bruce Willis hasn’t been in Los Angeles during the entire pandemic, but he has been there for a while. At the start of lockdowns, the actor was social-distancing with his ex-wife Demi Moore and their three daughters in Idaho. In May 2020 he returned to his current wife, Emma Heming, and their two daughters, in Los Angeles.  Hopefully, being caught will mean he’ll be more mindful of taking pandemic precautions moving forward. 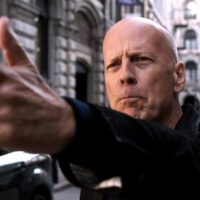