Britney Spears has posted another nude on her social media, this time from a bathtub.

Oops, she did it again. After hinting she may be finished with Instagram nudes, Britney Spears is baring all once more, this time from the bathtub. The iconic pop star has been posting scandalous photos like this one since she was released from her controversial conservatorship just over one year ago.

The latest Britney bombshell features the singer relaxing in the tub, closed eyes to the sky with a blissful smile. The star’s hands, along with tasteful flower clipart, scarcely censor her bathing suit areas. Britney Spears has never been one for subtlety; her latest posts push Instagram’s community guidelines to the limit.

The bathtub pic comes after Spears publicly toyed with the idea of slowing down her salacious posts in order to improve her relationship with her teenage sons. The challenges of fame have been on full display for Britney Spears since she was slingshotted into the spotlight in the late 1990s. Those challenges continue to pressure Spears and her family across generational lines, but that’s not stopping her from forming an identity apart from her tumultuous past.

For Spears, nude photos are a means of empowerment. A conservatorship stripped Spears of her independence in the late 2000s. Episodes of erratic behavior fueled by the stress of a public divorce from her ex-husband, Kevin Federline, were ammunition in court for Jamie Spears, Britney’s father, who gained dubious control over Spears’ life.

After over a decade under her father’s thumb, Britney Spears is declaring her newfound freedom on social media. Her efforts to express herself and undermine the stigma surrounding female nudity may be controversial to some, but that’s just the way she likes it. Her bathtub pic caption reads, “I like to suck… Never professional pics… Sucking comes easy for me!!! Keep clapping bitch!” with several emojis, of course.

A quick scan of the comments on Spears’ post reveals a diversity of opinions regarding the pop star’s approach to empowerment. Some celebrate Britney Spears feeling herself, while others greet the pictures with dismissal or disdain. Whichever camp Instagram users may be in, 46.1 million of them follow Spears on the social media platform.

This latest chapter of apparent empowerment is a breath of fresh air for a star whose life and career have been the subject of intense scrutiny for over two decades. She has been described as everything from a sex symbol to a head-shaving lunatic to a prisoner under her father’s rule to an Instagram icon taking back what’s her’s, Britney Spears has had a rollercoaster of a life. In the age of musician biopics, Spears’ life seems chockful of material; Spears, however, doesn’t seem too keen on the idea.

After Stranger Things star Millie Bobby Brown disclosed an interest in playing Britney Spears in a film about the pop star’s life, Spears shut down the idea on Instagram, reminding the world she is not dead. Far from it; Spears seems to be, for the first time in a long time, very much alive. What is next for the star is uncertain, but for now, fans can sit back and enjoy Britney’s reclaiming of herself in all its gorgeous glory. 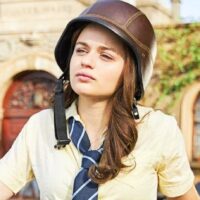