Brie Larson (Avengers: Endgame) has been making the rounds of turning heads and catching eyes on social media with her outfit choices and activities. Today (September 11), the Avenger posted two pictures on her Instagram (seen below) of her in blue yoga pants, white sneakers, and a dark sports bra.

The images show her performing some yoga in the streets of Padstow, England. In the caption, she said she had become a “stan” of chef and restaurateur Rick Stein, who she tagged. He is known for living in the town and fishing port that sits on the north coast of Cornwall, England. He operates multiple businesses there like restaurants, cafes, a cookery school, and a hotel.

After only an hour, the Instagram post of Brie Larson doing yoga has over 158,000 likes. The comments, as expected, contain fans expressing their love for the Oscar-winning actress. People commenting were about their passion for her, and others simply posting emojis of hearts and faces with hearts for eyes.

Brie Larson has caught a lot of attention on posts like these in recent months. Three weeks ago, she had some pictures of her in her sauna, where she likes to relax by stretching and meditating with a low-cut swimsuit. That same week, the Captain Marvel star also embraced what she referred to as “Folklore core” in reference to the Taylor Swift album by standing in a field with an oversized shirt (maybe a dress?). Two weeks ago, she showed off her archery skills while wearing a sports bra and jeans. Two days ago (September 9), she posted a weird green fishnet outfit with knee-high boots as she took a hike through the woods. You can probably imagine what the comments were on that last one.

Outside of eye-catching outfits, Brie Larson has caught attention for her workout routines. Training to be a superhero requires a lot of effort. For her standalone Marvel movie in 2019 and her handful of scenes in Avengers: Endgame required her to really pump some iron. She went through extensive training, like pushing a 5,000-pound jeep in one viral video.

Since the pandemic started last year, along with Brie Larson reprising her role as Carol Danvers/ Captain Marvel, for 2022’s The Marvels, she had to get back in shape. She built a gym in her garage where she and her trainer could get to work while gyms around the United States were shut down due to COVID-19. She has posted plenty of workout videos on her Instagram showing off what she is doing to get back to kicking alien ass in the superhero flick.

Fans can catch Brie Larson back in the flashing superhero outfit in The Marvels on November 11, 2022. She will be one-third of a trio consisting of Teyonah Parris’ (WandaVision), Monica Rambeau, and Iman Vellani’s Kamala Khan, who will debut in the Marvel Cinematic Universe this year in her own Disney Plus series, Ms. Marvel. They will also be met with Samuel L. Jackson (The Hateful Eight), Zawe Ashton (Nocturnal Animals), and Seo Jun Park (Parasite). 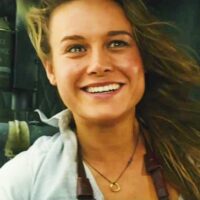