Some people are terrified of new technology, especially the kind of robot tech that looks like it will one day be part of the end of the human race when machines finally call it an existence and wipe everyone out. But others seem to embrace it, even oohing and ahhing at all the things robots can do these days. Brie Larson would appear to be in the latter group and put it on display recently. On her Instagram feed, the actress gave a glimpse of her catching up with a robot dog that has made plenty of rounds over the last few years. She appears quite impressed with the prospect, posing with the thing and having it show off some of the moves. It’s quite the show even if we might see these things running about in their own robot packs sooner than later, terrorizing humans in the robot takeover. Brie Larson won’t care. Check out what she posted on Instagram.

Brie Larson is backstage at some event posing with a Boston Dynamics Agile Mobile Robot which has also been called Spot. The machine has been in the news in recent years, having been first developed back in 2018. The technology has improved over time and it has quite the range of movements at this point. In the video (if you follow the Brie Larson instructions and swipe), the dog does a little dance and even enters in a little bow before it’s all said and done. The crowd in the background seems impressed by the show, and it’s easy to see why. After all, the is a mechanical and engineering feat, to say the least. The “dog” can carry more than 30 pounds, move up and down stairs, collect data (it has cameras all around it), and can run more than 28 miles per hour. Again, it’s cool and Brie Larson’s clan clearly thinks so. But there’s still something off-putting about these things.

And Brie Larson wasn’t the only one impressed with the Boston Dynamics robot dog. This post gained plenty of traction on Instagram with nearly 100K likes at the time of this writing. That being said, the reaction from Larson followers was a bit polarizing. There were some who weighed in on the positive side, clearly liking what they see from Boston Dynamics and marveling at how far the tech has come. But there were some reminding everyone that these things are a bit controversial and has drummed up dissension when used by law enforcement like they were in New York City for a time.

In all, Brie Larson was just looking to have some fun here with something that could be in a dystopian movie or even a futuristic one all things considered. Larson doesn’t have any of those on the docket, but she does have a superhero one coming next year when The Marvels finally hits the big screen for the MCU. She’ll reprise her role as Carol Danvers/ Captain Marvel for the movie. She’ll also have a role in the final Fast & Furious installment, Fast X. Let’s just hope the robots don’t take over first. 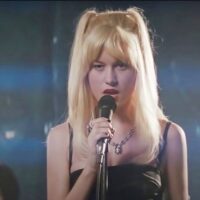