Brie Larson is ramping up for a pretty big year of blockbuster movies, so it makes sense for her to get some shuteye.

Brie Larson has been busy of late, even though she has not popped up in the Marvel Cinematic Universe for more than a few moments at a time since Avengers: Endgame in 2019. While her recent appearances as Carol Danvers have primarily been in service of setting up some mysterious pay-off in the future (as the MCU is wont to do), Brie Larson has been filming scenes for the next entry in the Fast and Furious franchise and the long-awaited Captain Marvel sequel. As such, it is no surprise that Brie Larson should need the time for a little snooze every once in a while. Check it out:

This picture is from Brie Larson’s extremely popular Instagram account (currently at seven million followers), wherein she is prone to posting images of herself in rather fetching outfits, doing pretty odd things in odd places, and, of course, her ab-shredding workouts. This particular picture shows the star of 21 Jump Street lying prone in what is likely her backyard, her eyes closed as though she has fallen into a slumber. One hand is resting on her forehead, pushing back her hair, and judging by the position of the shadows, the other is holding her camera above her to take the shot. While Brie Larson may be an Academy Award-winning actor, she cannot fool us into thinking that a candid shot just happened to be taken of her resting in the sunlight.

The caption to Brie Larson’s faux-sleepy picture reads “not pictured: @maggierogers playing louder than my neighbors appreciate,” which also would probably make sleeping in your Los Angeles backyard a little difficult. The musician Maggie Rogers herself responded to the tag with a trio of pale gray hearts, which we can only interpret as a whimsical message of appreciation. This picture adds to the continuing installation of pictures of Brie Larson in relaxing situations, such as this one of her chilling out on a rope swing or one of her doing yoga in the middle of a street in England, as one does.

Brie Larson is currently set to star in the upcoming film Fast X, in a so-far undisclosed role. However, there is some indication that the Fast and Furious superfan is probably going to be allied with Vin Diesel’s Toretto family in some way. Also, given the general direction of the franchise, if Brie Larson is not a friend of of Dom Toretto in this particular movie, she will likely be a staunch supporter and part of the family within a sequel or two. In addition to Brie Larson, Fast X will star franchise newcomers Jason Momoa, Daniela Melchior, and Alan Ritchson.

She will also be starring in The Marvels, the upcoming 33rd movie in the MCU. She will be joined by Ms. Marvel (Iman Vellani) and Monica Rambeau (Teyonah Parris), as well as old compatriot Nick Fury (Samuel L. Jackson). There is also a good chance she will be appearing in the Disney+ series Secret Invasion in some way, so we could be getting a whole lot more Brie Larson soon. 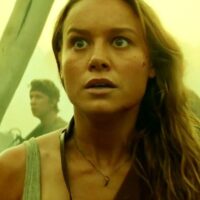