Though some actors have seen a decline of work due to the pandemic, Aubrey Plaza has had no such lull. The actor has been working diligently and has a new up and coming film she has begun to promote. This past week Plaza has been lighting up her Instagram with promotional photos for her new film Emily the Criminal. The film is premiering at Sundance and the actor celebrates the new independent film in the photos.

In another set of photos on Instagram, Aubrey Plaza laments not being able to watch it in the theater as the press tour was taking place over Zoom. Recent films – independent ones especially – have had to rely on streaming to get viewers. However, Emily the Criminal may connect with audiences due to its resonant subject material. Plaza plays Emily, a young person weighed down with mountains of student debt. The only way she can find to pay it off is to become involved in a credit card scheme. Deadline reports that the film is reminiscent of many classic neo-noir films. Movies like Heat capitalized on the gritty portrayal of L.A. in a modern world and Emily the Criminal seems to be following suit. There is nothing more modern than someone who can’t get out of student debt.

Collider writer Perri Nemiroff states that Emily the Criminal is the best thing she’s seen at Sundance this year. The themes depicted are universal and something that the director John Patton Ford was aware of. He struggled with the confidence to keep pursuing his dreams when there were other ways to make money. All those involved seem to have a true passion for the subject matter which translates well if initial reactions to the film are to be believed. This is no surprise for fans of Plaza, either. Since her career has started she has become an intriguing film star to watch.

Anyone who has been following Aubrey Plaza’s films can see that she takes on many varied projects. From the humorous to the horrific, there doesn’t seem like there is anything she can’t do. Plaza first came on the scene as deadpan and provocative April Ludgate on Parks and Recreation. The actor herself had been a page for NBC at the time and transferred her characteristics to the character (via Elle). April went from being a disinterested 19 year old to someone with a thriving career. And that was just the start of Plaza’s work in the industry.

She recently can be seen in horror films like the Child’s Play reboot as well as independent film Black Bear. Decider covered the 2020 film and gave it a resounding recommendation. Black Bear is an intense depiction that any thriller lover will enjoy. Aubrey Plaza also has many promising opportunities in store for the future. HBO’s White Lotus was a massive success when it first premiered in 2021 with a rating of Certified Fresh on Rotten Tomatoes. Now the series is on schedule for a season 2.

White Lotus has tapped Aubrey Plaza to appear in the second season, an inspired choice for the dark humor that the show employs. Plaza is reported to play a character named Harper Spiller, one of the new guests at the hotel. No release date has been set as of yet, but fans are sure to enjoy her specific sense of humor when it streams on HBO. 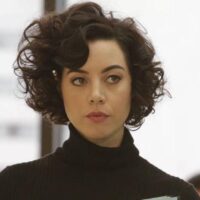