We’re not sure if a screening of the 1988 buddy cop film Red Heat — in which Arnold Schwarzenegger played a Moscow militia captain teaming up with Jim Belushi — would help or hurt his case. Regardless, the former governor of Californias is dealing with the rage of just about every pro-Putin pundit in Russia. A viral video from last week has anyone supporting the invasion of Ukraine so furious at the actor, you’d think they were all named Sarah Connor.

Last week, Arnold Schwarzenegger posted a video addressed to the Russian people. As Yahoo News points out, along with posting it on social media sites more popular in the west, he also made sure the video went up on Telegram, which is used mostly by Russians. He begins the video by telling a story of when he met the Russian weightlifter Yury Vlasov. The fact that the young Schwarzenegger kept a poster of a celebrity from Russia was apparently a source of anger for his father, a veteran of World War II who had fought against the Soviets at Leningrad. Schwarzenegger goes on to urge the Russian people that they aren’t being told the truth about what’s going on in Ukraine. You can watch his video below.

Speaking specifically to Russian soldiers, Arnold Schwarzenegger once again invoked the memory of his father. When his father arrived in Leningrad on the side of the Nazis, Schwarzenegger said, he “was all pumped up on the lies of his government.” When he left, the actor continues, his father “was broken physically and mentally. He lived the rest of his life in pain: pain from a broken back, pain from the shrapnel that always reminded him of those terrible years and pain from the guilt that he felt.” He urges the Russian soldiers to avoid the same path as his father, “you already know much of the truth that I have been speaking. You have seen it with your own eyes. I don’t want you to be broken like my father.”

The response from Russia has been fierce, with those backing Vladimir Putin and the invasion of Ukraine using the vocabulary of Arnold Schwarzenegger’s most popular films against him. Zakhar Prilepin, a well-known Russian author who is wanted by Ukrainian authorities for terrorism charges, called Schwarzenegger “a predator and an enemy.” Likewise, Russian powerlifter Maryana Naumova invokes the iconic Terminator franchise in her response. “Do you remember how in the second part of the Terminator your hero goes back in time to prevent the creation of Skynet, which would bring the death of all mankind?” Naumova posited. “Russia’s special military operation does not aim to destroy the Ukrainian people. It is aimed at the neo-Nazi Skynet… Don’t side with Skynet, Terminator.”

Particularly incensed was Russian TV host Vadim Gigin. On his state-run program Sunday Evening With Vladimir Solovievon, Gigin called Arnold Schwarzenegger’s face “the cover page of American imperialism and colonialism.” He dismissed any and all criticism the former governor made toward the Russian government as “Russophobia” and complained that “He, in California, will tell us, who live here… the truth?”

As far as what’s going on in the war itself, the New York Times reports the Russian army’s advance has been stalled as Ukrainian forces retake the town Makariv. 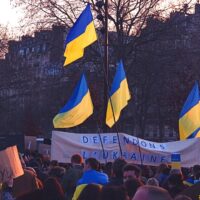 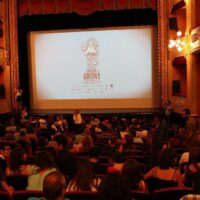