Sometimes it’s easy to forget for just how long Arnold Schwarzenegger has been in the public eye. While it was his turn as the titular cybernetic villain of 1984’s The Terminator that put him on the path to becoming a household name and one of the biggest action stars in cinema history, the future governor of California was making his name in the bodybuilding world long before he was Terminator, Conan, or arguing with Kindergarteners about potential cancer diagnoses. Now an old clip from the seventies is getting a lot of attention on Reddit of Schwarzenegger giving a children’s show’s host tips on bulking up.

The clip from the late seventies British children’s show Magpie was posted to Reddit’s Old School Cool earlier this week, quickly attracting upvotes in the tens of thousands. The host is Tommy Boyd, who isn’t quite as sure of himself when it comes to lifting weights but Arnold Schwarzenegger does everything he can to build his confidence. You can watch the clip below.

While we can’t say with absolute certainty, considering that it was the year that marked the premieres of both Magpie and Pumping Iron — the bodybuilding documentary Arnold Schwarzenegger was promoting in the above video — the clip is most likely from 1977. Already, as many adoring commenters on Reddit note, you can tell that Schwarzenegger is all about lifting others up along with himself. When Boyd indulges in some self-deprecating humor about his own physique compared to Schwarzenegger’s, the latter responds with, “First of all, I have to compliment you for your physical development because you really look very athletic and good, so don’t put yourself down.” Later, after Boyd tries some dumbbell exercises, the future Conan the Barbarian star says “You’re already pumped up! I can’t believe that. This man is growing fast.”

Toward the end of the clip, Boyd returns the compliment to Arnold Schwarzenegger, saying, “I gather you’ve not only broken through the pain barrier very successfully, you’ve broken into films.” While by the time this clip was recorded, Schwarzenegger had very few roles under his belt — including his big screen debut in 1970’s Hercules in New York — it would be only a few more years before he was earning his stardom in big ways. Between 1982 and 1984 he played a sword-wielding hero in two Conan movies and Red Sonja, and in 1984 came the game-changing The Terminator. Before the eighties was over he’d star in action classics like Commando, Predator, and The Running Man. He even made his first successful comedy — opposite Danny DeVito in Twins — before the decade was out.

Arnold Schwarzenegger is still — in his mid-70s — making movies, though not quite as often. But the Schwarzenegger legacy may very well have another superstar on the way. The Governator’s son Patrick will soon be appearing in The Boys Presents: Varsity on Amazon Prime Video, and apparently explaining his role to his father was a little complicated. Patrick said he showed the elder Schwarzenegger production photos and that his father was shocked at what he saw. “He looked at me and he was like, ‘What the f–k are you filming?'” Patrick said. The younger actor didn’t go into detail about the nature of his character, though he did say that once he knew the details about the role, that he knew it would be, “fun and interesting.” 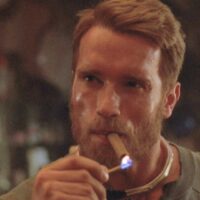