Actress Amy Smart has one of those careers. She has been in plenty of high-profile movies and then she has been in her share of complete disasters. But regardless of the movie or series, she always gives it her all. This dedication to her craft has also touched her personal life.

Amy Smart began her professional career as a model in Italy. While in Milan attempting to carve out a spot in the modeling industry, she met fellow model and actress Ali Larter (Varsity Blues, The Rookie) there. They became instant friends and when the modeling didn’t pan out in Italy, the pair moved back to Los Angeles where they took acting classes together.

Amy Smart followed her brief modeling career with her jump into acting. Her first appearances came in the TV series’ Suddenly Susan and Chicago Sons. In fact, her first few appearances were on TV shows. She was also seen on Chicago Hope, Just Shoot Me!, and Dawson’s Creek before Smart made the move to feature films.

Her first feature film project came on the 1999 hit Varsity Blues. In it, she plays Jules Harbor, girlfriend to James Van Der Beek’s Mox. Her career was ready to take off.

Amy Smart was then seen in the features Outside Providence, Road Trip, and Scotland, Pa. She then grabbed a recurring role on the series Felicity. Smart found time on the features Rat Race, The Battle of Shaker Heights, Blind Horizon, and Ashton Kutcher’s The Butterfly Effect.

Right after The Butterfly Effect, she was cast in the feature film redo of the TV series Starsky & Hutch that co-starred Ben Stiller and Owen Wilson. For her part in the movie, Smart, along with Wilson and Carmen Electra, were nominated and won the MTV Movie Award for Best Kiss. Yes, the three of them.

The list of Amy Smart’s movies is extensive. She has played lead roles, co-starring roles, and very minor roles. Her resume shows she isn’t picky about the films she is in.

She followed Starsky & Hutch with a lead role in Just Friends with Ryan Reynolds. She appeared as Eve in Crank with Jason Statham as well as its sequel Crank: High Voltage. She appeared in a recurring role on the hit sitcom Scrubs as JD’s (Zach Braff) girlfriend. She has appeared in other good TV series such as Shameless and Justified.

Amy Smart has also appeared in her share of stinkers. Case in point, one of her latest ventures: Avengers of Justice: Farce Wars. The movie was a parody, a strange mix of superheroes and Star Wars that fell flatter than a freshly made pancake. How an actor or actress chooses a role like that is a mystery.

WHY YOU MAY NOT HAVE SEEN HER LATELY

The past few years have seen Amy Smart slow down a bit when it comes to stepping in front of the camera. Her reason is valid. She is now a mom.

According to Smart, trying to conceive was one of the most difficult things she and her husband, Trading Spaces star Carter Oosterhouse, had to face. “When we got married, I didn’t know if we were going to get pregnant right away,” Smart told PEOPLE. “That didn’t happen. Years went by and we were just on this roller coaster. Nothing was working. We started to wonder if we were ever going to be parents.”

The couple married in 2011 and after years of struggling, they decided instead to go the surrogate route. In December of 2016, they welcomed a baby girl. “We are so grateful we are parents and that we have a beautiful, healthy daughter,” says Smart. “But it was hard and the more that we can talk about it, the more that we can share our struggles, our difficulties, the more we can help each other and not feel alone in the process.” Smart explained to US Weekly that the three are happiest when they enjoy nature as a trio, “We love to go on hikes, we love to walk on the beach. We’re in the garden. We’re outside.”

But Amy Smart also says that while she prefers being a full-time mom, she does want to keep working and also give her and her husband some time together, “Right now she comes first,” Smart says of her daughter. “But I want to and I’m still continuing to work.” She added, “I feel like I don’t indulge enough,” but she and Oosterhouse are great about finding time for date nights. “We go to dinners and see movies. I think that’s so important.”

AMY SMART STANDS BY HER MAN

Perhaps even more difficult than dealing with trying to have a baby was the way Amy Smart had to deal with sexual misconduct allegations concerning her now-husband. The allegations were made by a former makeup artist from her time on the set of Carter Can.

The artist in question, Kailey Kaminsky, who identifies as a lesbian, came out in 2018 with the shocking claim. She told The Hollywood Reporter that back in 2008, she felt coerced into performing oral sex on Oosterhouse in fear of losing her job. Her claim was that he was incessant in his badgering for her to perform such duties and she finally had to give in when he threatened her job.

“At that point I was a nervous wreck,” says Kaminsky. “I was so worn down from his advances, so I did: that day, on that occasion. It was the first time. Then thereafter it was most every time we would shoot — 10 to 15 times he put me in this position.”

Oosterhouse has admitted to this relationship but denies it was forced, even though he knew of her proclivity to the same sex. For Amy Smart’s part, she stood beside her husband against the accusations. She posted a lengthy rebuttal to Kaminsky’s claims on her Instagram that can be seen below.

Oosterhouse also released a statement concerning Kaminsky’s claims. In part, he said, ”I want to address a couple of the things she said. First, I didn’t have anything to do with her not being invited back to the show — that was a producer decision. And as for the fact that she identifies as a lesbian — I didn’t know that — all I knew was that she was in a sexual relationship with another guy who worked on the show. It’s upsetting that she now feels this way, I only wish her the best and truly hope that she can move forward.”

NEXT FOR AMY SMART

With all this behind her, Amy Smart has continued to work, even while keeping her full-time mother gig. Her latest venture is on the hit show Stargirl, where she plays another mom, this time to Stargirl herself. Look for Smart to continue her acting career, albeit perhaps a bit pickier. Let’s just hope she doesn’t find herself in the Avengers of Justice: Farce Wars sequel. 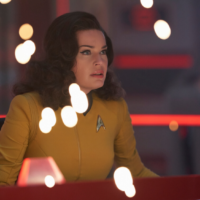 Rebecca Romijn: From Model to Star Trek’s Number One

Gina Carano Responds To People Trying To Get Her Fired 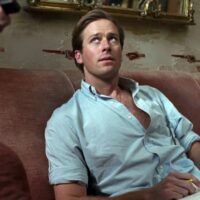