Ali Larter has been accused of racially insensitive behavior during her time on the series Heroes. Co-star Leonard Roberts has posted an essay on Variety detailing his experiences during the first season of the series and how he felt that he was subjected to actions that were motivated by his race.

In the first season of Heroes, Ali Larter and Leonard Roberts played characters that were in a romantic relationship. During a scene in which Larter’s character was asked to bare her shoulders in proximity to Roberts, the actress allegedly fought against the decision and supposedly said that she “expressed she had never been so disrespected — as an actress, a woman or a human being,” according to Roberts. However, she later had a seductive scene with co-star Adrian Pasdar and Roberts recounted that Larter “exuberantly played a different scene with [Adrian Pasdar] involving overt sexuality while wearing lingerie, but found aspects of one involving love and intimacy expressed through dialogue with my character, her husband, disrespectful to her core. I couldn’t help wondering whether race was a factor.”

Leonard Roberts goes on to say that he had a meeting with Heroes showrunner and creator Tim Kring about how his character would be utilized in the show’s second season. However, Kring said that “due to the Ali Larter situation” they would not be bringing his character back. Kring said that the two did not have any chemistry, but Roberts believes there may have been racially motivated reasons for the decision. Roberts highlighted that there were no Black writers working on the show during his tenure, even though the series had three Black recurring characters.

Ali Larter actually responded to Leonard Roberts’s exhaustive essay and categorically denied that these instances occurred. “I am deeply saddened to hear about Leonard Roberts’s experience on Heroes and I am heartbroken reading his perception of our relationship, which absolutely doesn’t match my memory nor experience on the show,” Larter said. What is interesting is that Variety claims that they corroborated Roberts’s account of these incidents with at least ten other people involved in the production of Heroes. It sounds like Larter might be outnumbered here in regards to her recollection of events.

It is going to be interesting to see if these new allegations have any substantive effect on Ali Larter’s current career. She recently co-starred in the television series Pitch and The Rookie. She is also set to be a lead character in The Sidelines, a comedy show that focuses on a 40-year-old mom who wants to chase her dream of becoming a professional football cheerleader. Could the allegations that Roberts made in his essay end up costing her this new gig? Or are they distant enough in the past for very few people in the business to take seriously?

We have certainly seen companies and corporate entities respond to perceived racial issues over the past few years, and Ali Larter may end up having to provide a better answer for her alleged behavior than simply dismissing it as not occurring. Hollywood is struggling with the issues of diversity, representation, and acceptable behavior on their sets, and these decade-and-a-half-old incidents from the production of Heroes hopefully showcase that there has been some significant progress made. It is a shame that Leonard Roberts had such a demoralizing experience during his brief tenure on Heroes, and it is hopeful that these accusations get properly sorted out and he finds some semblance of closure.

Carmen Electra: Why You Haven’t Seen Her Til The Last Dance 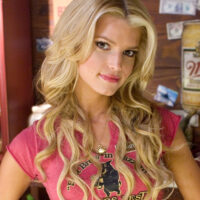 Jessica Simpson At 40: How She Changed TV And What She’s Doing Now

Kaley Cuoco Naked: How She Survived The Fappening And What She Did After