Alexandra Daddario showed up to the 74th Primetime Emmys last night and did what practically no one can do: make a Dior haute couture the second-most stunning thing in the room. Fortunately for anyone who did not sit down for the award ceremony, Alexandra Daddario has a robust social media presence and decided to show off the look for the rest of the world to see. Her Instagram currently has over 22 million followers, all of whom were lucky enough to check out this gown.

As you can see from the picture set above, Alexandra Daddario is dressed in a floor-length dress that manages to hide exactly nothing. The White Lotus actress tagged Dior in the pictures as the designer of the dress, as well as styling by Emma Jade Morrison, makeup by Lottie, and hair by Marty Harper, but it is very clear who the star is here. The Dior dress is sheer to the point of translucency and elaborately beaded, making it look like Alexandra Daddario is walking around in a very sexy mist.

Unfortunately, Alexandra Daddario ultimately did not win the Primetime Emmy Award for Outstanding Supporting Actress in a Limited or Anthology Series or Movie, which was her first nomination in the category. The award went to her co-star in The White Lotus, Jennifer Coolidge, who is also one of the few members of the cast who will return for the second season of the HBO Max show. Interestingly (and tellingly for Emmy voters’ watching habits), out of the seven actresses nominated in the category, five were from The White Lotus: Alexandra Daddario, Jennifer Coolidge, Sydney Sweeney, Connie Britton, and Natasha Rothwell.

While she may not be returning to The White Lotus, Alexandra Daddario will soon be the lead of her very own show featuring a collection of mysterious, troubled beautiful people. She will be starring in the upcoming AMC show Anne Rice’s Mayfair Witches, adapted from a series of novels about a mysterious, troubled family of beautiful people who live in New Orleans and have mysterious connections to a troubled spirit named Lasher. Alexandra Daddario will be starring as Rowan Fielding, a San Francisco neurosurgeon who is drawn into a world of secrets and magic.

Mayfair Witches is one of two shows currently being adapted by AMC from the works of the late Anne Rice. The first show is Interview with the Vampire, based on her most famous novel, and is scheduled to debut on October 2, starring Jacob Anderson as Louis de Pointe du Lac (the titular interviewee) and Sam Reid as Lestat de Lioncourt. The Vampire Chronicles (as Rice’s most popular works are known) have crossed over with her Mayfair Witches books, so it is probably only a matter of time before we see Alexandra Daddario show up there too.

For now, it is sad for Alexandra Daddario that she did not win her first Emmy, but hopefully, Mayfair Witches will give her plenty of opportunities to. If that involves more dresses like this one, we’re fine with it. 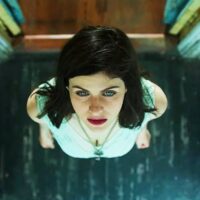